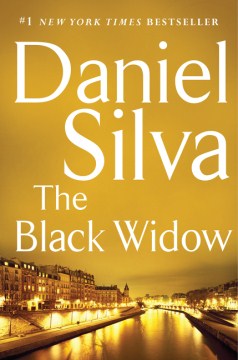 *Starred Review* Gabriel Allon, art restorer and Israeli spy, is supposed to be dead, but he's really very much alive and about to take over the directorship of Israel's secret intelligence service (called the Office by those on the inside). But before that can happen, there's some field work that needs attending to: Hannah Weinberg, an old friend of Allon's and the director of the Weinberg Center for the Study of Anti-Semitism in France, was killed, along with hundreds of others (including several Israelis), when the Paris center was destroyed by a bomb in a carefully executed ISIS attack. Now, working with the French and eventually the Americans, Allon is leading a team charged with finding and killing the ISIS leader called Saladin, who orchestrated the Paris attack and is planning another, even bigger strike. To carry out his plan, Allon conscripts a Jewish doctor, Natalie Mizrahi, to pose as a Palestinian, get herself recruited by ISIS, and become the Office's eyes and ears within the organization. Echoing John le Carré's The Little Drummer Girl (1983), the narrative takes us not only inside an Islamic terrorist group, but also inside the head of an initially reluctant but then committed double agent, who must learn to subsume one identity beneath another. This is a compelling thriller as Silva layers tension into his narrative like a symphony conductor, with Natalie becoming more involved in Saladin's next attack, and Gabriel balancing his need for intelligence against his agent's safety; but the novel also affords a sobering, insightful, and multifaceted look at the overwhelming complexities of the seemingly interminable war in the Middle East. And, for series fans, Silva introduces a new and richly conceived character who is likely to become a regular cast member. A winner on all fronts. Copyright 2014 Booklist Reviews.

Art restorer, assassin, spy—Silva protagonist Gabriel Allon could be heading anywhere in his new global thriller (no plot reveals yet). Silva himself will be heading on a ten-city tour. With a 500,000-copy first printing.