People of the book : a novel / Geraldine Brooks. 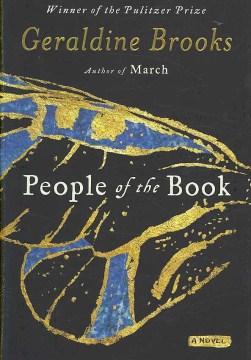 *Starred Review* With an ingenuity equal to that standing behind her Pultizer Prize–winning March (2005), which was a fictional imagining of the life of the father character in Louisa May Alcott's classic novel Little Women, Brooks now fictionalizes the history of an actual book, the Hebrew codex known as the Sarajevo Haggadah, an extremely precious illuminated manuscript originally from medievel Spain. In 1996, as Brooks has it, as a ceasefire is effected to quell the bloody violence in Bosnia, Australian book conservator Hanna Heath is called to restore the famous Sarajevo Haggadah. The condition of the manscript, including a stain on a page and certain items clinging to it (among them an insect wing that falls from the binding when Hanna conducts her preliminary review of repair needs), leads her on a search for answers to where the Haggadah has been all its life. This, of course, leads Brooks on a marvelously evocative journey backward in time, to periods of major religious strife and persecution, from the 1940 German occupation of Yugoslavia, to 1894 Vienna, to 1609 Venice, to 1492 Barcelona, and, finally, 1480 Seville. Like a flower growing through a crack in a slab of concrete, the exquisitely beautiful Sarajevo Haggadah remained an artistic treasure throughout the centuries despite always seeming to be caught between opposing sides in skirmishes of greed, intolerance, and bloodlust. Copyright 2007 Booklist Reviews.

Salt crystals and insect wings. Caught in the binding of a valuable Haggadah saved by a Muslim from a Serb bombing in Sarajevo, these artifacts and more suggest the book's rich history. With a 17-city tour; reading group guide. Copyright 2007 Reed Business Information.

When Australian rare-books author Hanna Heath travels to Sarajevo to restore the legendary Sarajevo Haggadah, she gets a lot more than she bargained for. The beautiful book was rescued during a Serb bombing by Muslim librarian Ozren Karaman, and Hanna ends up deeply humbled by his suffering after their too easily launched affair. Eventually, she's led into her own past, where she unearths the truth about the father she never knew. What the reader gets in the meantime is an intriguing history of the Haggadah itself, revealed through artifacts accumulated over time and things the book has lost—its silver clasps, which were turned into earrings for a Viennese doctor's mistress in the late 1880s. From an insect wing, we learn that the book was saved from the Nazis by Partisan fighter Lola and a Muslim family friend; wine stains recall the Inquisition in early 1600s Venice and saltwater droplets the Jews' expulsion from Spain in 1492. A single cat hair returns us to the book's creation in 1480 Seville and the unexpected story behind its illustrator. Each story is engrossing and deftly woven into the narrative, though the telling is sometimes facile or cloying. Nevertheless, this latest from Pulitzer Prize winner Brooks (March ) is a good addition to most libraries and excellent for discussion groups. [See Prepub Alert, LJ 9/15/07.]—Barbara Hoffert, Library Journal

Reading Geraldine Brooks's remarkable debut novel, Year of Wonders , or more recently March , which won the Pulitzer Prize, it would be easy to forget that she grew up in Australia and worked as a journalist. Now in her dazzling new novel, People of the Book , Brooks allows both her native land and current events to play a larger role while still continuing to mine the historical material that speaks so ardently to her imagination. Late one night in the city of Sydney, Hanna Heath, a rare book conservator, gets a phone call. The Sarajevo Haggadah , which disappeared during the siege in 1992, has been found, and Hanna has been invited by the U.N. to report on its condition.

Missing documents and art works (as Dan Brown and Lev Grossman, among others, have demonstrated) are endlessly appealing, and from this inviting premise Brooks spins her story in two directions. In the present, we follow the resolutely independent Hanna through her thrilling first encounter with the beautifully illustrated codex and her discovery of the tiny signs—a white hair, an insect wing, missing clasps, a drop of salt, a wine stain—that will help her to discover its provenance. Along with the book she also meets its savior, a Muslim librarian named Karaman. Their romance offers both predictable pleasures and genuine surprises, as does the other main relationship in Hanna's life: her fraught connection with her mother.

In the other strand of the narrative we learn, moving backward through time, how the codex came to be lost and found, and made. From the opening section, set in Sarajevo in 1940, to the final section, set in Seville in 1480, these narratives show Brooks writing at her very best. With equal authority she depicts the struggles of a young girl to escape the Nazis, a duel of wits between an inquisitor and a rabbi living in the Venice ghetto, and a girl's passionate relationship with her mistress in a harem. Like the illustrations in the Haggadah, each of these sections transports the reader to a fully realized, vividly peopled world. And each gives a glimpse of both the long history of anti-Semitism and of the struggle of women toward the independence that Hanna, despite her mother's lectures, tends to take for granted.

Brooks is too good a novelist to belabor her political messages, but her depiction of the Haggadah bringing together Jews, Christians and Muslims could not be more timely. Her gift for storytelling, happily, is timeless.

Margot Livesey's The House on Fortune Street will be published by HarperCollins in May 2008.