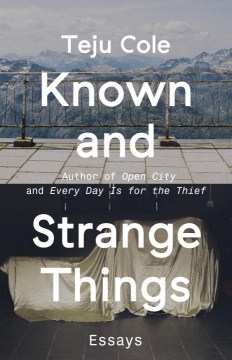 *Starred Review* Picture a kaleidoscope: each shining component is a small jewel for sure, but taken together, they form a stunning picture that can be viewed from myriad dazzling angles. The same can be said for the social and critical commentary by award-winning novelist Cole (Every Day Is for the Thief, 2015) in this essay collection, his first nonfiction title. The articles analyze various aspects of culture, from poetry, books (a conversation with author Aleksandar Hemon is included here), photography, and more. Cole's insights cast fresh light on even the most quotidian of objects. He shares his reasoning about why all selfies are the same; and, in a beautiful essay about artist-collectors, shows how the very ubiquitousness of pictures in today's digital, smartphone world is leading to our interpreting visual art in new ways. An American brought up in Lagos, Cole places race, especially in the context of an outsider-insider perspective, under the microscope as well. A particularly moving essay discusses the disconnect between the America of his Nigerian imagination and the one he eventually came "home" to. Cole's collection performs an important service by elevating public discourse in an unsettled time. Copyright 2014 Booklist Reviews.

After two genre-redefining works of fiction—Open City, which won the PEN/Hemingway Award and was a finalist for the National Book Critics Circle Award, and Every Day Is for the Thief, named one of the Ten Best Books of the Year by Dwight Garner in the New York Times—Cole here lets pour more than 40 of his essays on politics, place, history, literature, and art, on subjects ranging from Virginia Woolf and W.G. Sebald to President Obama, Palestine, and Boko Haram; essays like "The White Industrial Savior Complex" have gone viral. Key here is the paperback format, meant to facilitate broad distribution.

Three experiences structure this first nonfiction collection from novelist Cole (Every Day Is for the Thief). The first section, "Reading Things," offers appreciations of writers, among them Tomas Tranströmer, Sonali Deraniyagala, André Aciman, Ivan Vladislavic, and, especially, W.G. Sebald, whose work raises the same ethical questions Cole asks time and again. The second, "Seeing Things," explores the work of visual artists, primarily photographers, from places as different as Mali, Russia, France, and South Africa, and casts keen-eyed scrutiny upon photography itself. Cole's tripartite structure concludes with "Being There." Throughout, Cole forges unexpected connections, as in "Unnamed Lake," in which, over the course of one sleepless night, his mind wanders over different historical moments: a Nazi performance of Beethoven at the opening of the extermination camp in Belzec, Poland (1942); the death of the last Tasmanian tiger (1936); a military coup in Nigeria (1966); a ferry disaster in Bangladesh (2014); and the atomic bombing of Nagasaki (1945). Cole is a literary performance artist, his words meticulously chosen and deployed with elegance and force. To read, see, and travel with him is to be changed by the questions that challenge him. As he observes of one writer, "The pleasure of reading him resides in the pleasure of his company"; the same may well be said of Cole. Agent: Andrew Wylie, Wylie Agency. (Aug.)

Portrait inside my head: essaysLopate, Phillip, 1943-

Busted in New York and other essaysPinckney, Darryl, 1953-

White sands: experiences from the outside worldDyer, Geoff

This old man: all in piecesAngell, Roger