The fire this time : a new generation speaks about race / edited by Jesmyn Ward. 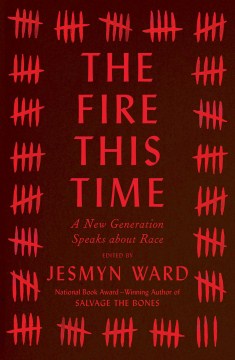 *Starred Review* James Baldwin's famous book of essays, The Fire Next Time (1963), brilliantly examines the interrelated roles of race, history, and religion in the U.S. Building on Baldwin's title, editor Ward has assembled poetry, essays, and flash nonfiction to address the renewed racial tensions that continue to boil in America in the twenty-first century. The author of two award-winning novels and the critically acclaimed memoir Men We Reaped (2013), Ward divides the volume into three sections: "Legacy," "Reckoning," and "Jubilee." The result is a powerfully striking collection, from Honorée Jeffers' illuminating and exhaustive efforts to correct the legacy of Phillis Wheatley, the first African American woman to publish a book of poetry in the U.S., to poet Kevin Young's insightful consideration of the humor and tragedy at the heart of the racial hoax perpetrated by the former president of a chapter of the NAACP, Rachel Dolezal. "White Rage," a short piece by Carol Anderson, deftly reconfigures the outrage and violence of Ferguson, Missouri, as the result of calculated oppression, and poems by Jericho Brown, Natasha Tretheway, and Clint Smith punctuate the book. An absolutely indispensable anthology that should be read alongside other recent, equally transformative works, including Ta-Nehisi Coates' Between the World and Me (2015) and Claudia Rankine's Citizen (2014). Copyright 2014 Booklist Reviews.

In the 1962 essay "Letter to My Nephew," published in the Progressive and later reprinted in the groundbreaking The Fire Next Time, James Baldwin said, "You know and I know, that the country is celebrating one hundred years of freedom one hundred years too soon." Recent events show that it's still too soon. Here, National Book Award winner Ward (for the bar-setting Salvage the Bones) springboards from Baldwin's essay to collect 19 essays and poems—15 written for this volume—addressing race in America. Including authors like Edwidge Danticat, Kevin Young, Isabel Wilkerson, and Roxane Gay; with a five-city tour.

Using James Baldwin's The Fire Next Time as inspiration, this collection by National Book Award winner Ward (English, Tulane Univ.; Salvage the Bones) explores what it means to be black in America, past and present. A stellar cast of writers and poets ruminate on contemporary events such as the racially motivated church shooting in Charleston, SC, in 2015. Especially enlightening is the excerpt from Carol Anderson's White Rage, noting white backlash to Brown v. Board of Education. Novelist Edwidge Danticat parallels black mourning today to the events of the 1999 Amadou Diallo case, wondering how to explain injustice to her children. Poet Claudia Rankine describes the anxiety that mothers of black sons face, while cultural critic Garnette Cadogan relays the danger of walking as a black man (no hoodies or standing on street corners). Writer Kiese Layman mesmerizes with a reflection of hip hop duo Outkast, and Mitchell S. Jackson eloquently narrates the father figures in his life. Many black families will relate as Ward laments the difficulties of constructing a family tree or Rachel Kaadzi Ghansah's experience as the sole employee of color. VERDICT This relevant anthology illuminates the fears, hopes, and joys of blackness and will spark interest in the contributors' previous works. [See Prepub Alert, 2/8/16.]—Stephanie Sendaula, Library Journal

In this timely collection of essays and poems, Ward (Men We Reaped) gathers the voices of a new generation whose essays work together as one to present a kaleidoscopic performance of race in America. The 18 contributions (10 of which were written specifically for this collection) cover topics deep in history as well as those in the current culture. One, for example, reveals fresh insight about Phillis Wheatley, the first published African-American poet, and her husband, while other essays are situated in the present, taking readers on a tour of street murals in N.Y.C. and exploring the music of hip-hop duo OutKast. One entry evokes the experience of a young college student exploring the streets of a new city as he learns "what no one had told me was that I was the one who would be considered a threat." Over the course of the collection, readers engage with the challenge of white rage, and learn about the painful links between Emmet Till's open casket and the black bodies on today's streets. The two concluding pieces provide a profoundly moving view of the future deeply affected by the past, through a husband's letter to his expectant wife, followed by a mother's message to her daughters. Ward's remarkable achievement is the gift of freshly minted perspectives on a tale that may seem old and twice-told. Readers in search of conversations about race in America should start here. (Aug.)