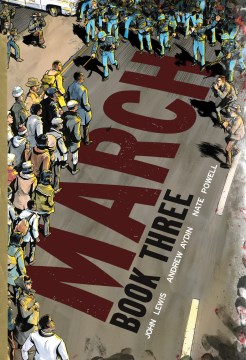 *Starred Review* Opening with the bombing of the Birmingham Baptist Church, this concluding volume in Lewis, Aydin, and Powell's critically acclaimed series highlights the growing violence and tensions among activists in the civil rights movement leading up to Freedom Summer and Johnson's eventual signing of the Voting Rights Act of 1965. As protests and marches—and sometimes merely being black—in Alabama became increasingly dangerous, opinions among activists in the movement were divided. Continue to march and risk serious harm? Or put their trust in white leaders who were only willing to meet them partway? Though Lewis and Aydin throw a lot at readers in this volume, their message, helped along seamlessly and splendidly by Powell's fantastic, cinematic artwork, is abundantly clear: the victories of the civil rights movement, symbolized in particular by Barack Obama's inauguration, are hard-won and only succeeded through the dogged dedication of a wide variety of people. Perhaps the greatest strength of this last volume is that, despite closing pages during which Lewis suggests the movement is over, the chilling similarities between the violent political atmosphere more than 50 years ago and today remind readers that the drive for justice and equality is ongoing. It's a stirring call to action that's particularly timely in this election year, and one that will resonate and empower young readers in particular. Essential reading. Copyright 2014 Booklist Reviews.

This final volume includes the expected and necessary set pieces from the civil rights movement, culminating, finally, with the Voting Rights Act of 1965. But the smaller, lesser-known moments of violence, injustice, and helplessness are no less painful than these major events to read about, and Lewis recalls them with intimate familiarity and bracing honesty. Powell's kinetic, fluid black-and-white illustrations underscore the period's brutality. Copyright 2016 Horn Book Guide Reviews.

This final volume (March: Book One, rev. 1/14; March: Book Two, rev. 5/15) includes the expected and necessary set pieces from the civil rights movement: the 1963 bombing of the 16th Street Baptist Church in Birmingham and the murder of four young girls; Freedom Summer in Mississippi, from voter registration drives and slain volunteers to Fannie Lou Hamer, the Mississippi Freedom Democratic Party, and the 1964 Democratic Convention; the iconic march from Selma to Montgomery that roused the nation from its complacency; and, finally, the Voting Rights Act of 1965. But these events yield to smaller and lesser-known moments of violence, injustice, and helplessness -- beatings and lynchings, political and judicial indifference -- that are no less painful to read about. Since he was chairman of the Student Nonviolent Coordinating Committee during this period, Lewis has a unique perspective from which to recall these events, and he does so with intimate familiarity and bracing honesty. As the narrative progresses, there is a palpable sense that the mounting obstacles are not only taking a serious toll on Lewis but that indeed the entire movement is fraying under the strain. Powell's kinetic, fluid black-and-white illustrations create a relentless cascade of words and images that assaults the senses and underscores the brutality of the period. From Maus to Persepolis, graphic-novel memoirs have accounted for a large share of critical acclaim for the comics format, and now that this trilogy is complete, it can stand shoulder to shoulder with any of them. jonathan hunt

The final volume of congressman and civil rights crusader Lewis's memoir, produced with cowriter Aydin, gives a perfect balance of clarity and passion, drawing readers into the emotions of civil rights struggles, while carefully providing context and information, as well as empathy, even for the worst of the movement's foes. Beginning with the church bombing at Birmingham, Ala.; moving through the blood-soaked years from 1963 to 1965; and ending with the signing of the Voting Rights Act, Lewis's on-the-ground viewpoint puts many human faces on the historic battles. The narrative reveals the real work of revolution, focusing not just on the well-known events but the behind-the-scenes decision making, compromises, personal battles, sacrifices, and overall political landscape. It's a dense and informative work propelled by Powell's fluid layouts and vivid depictions of violence and emotion, as well as a personal passion that helps make this memoir timely and relevant, drawing a straight line between decades to compare the modern iterations of a struggle that still continues. (Aug.)