The passage : a novel / Justin Cronin. 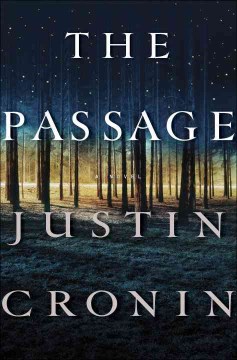 In this apocalyptic epic that begins in a gloomy near-future, gasoline is $13 a gallon; New Orleans has become an uninhabitable, toxic swamp after a series of devastating hurricanes; the U.S. is steadily losing the war on terror; and the future of humanity hinges on the actions of a young girl. Six-year-old Amy Harper Bellafonte, abandoned to the care of Memphis nuns by her prostitute mother, and her protector, disillusioned FBI agent Brad Wolgast, are at the epicenter of a battle to preserve the human species after a government military experiment to create a "super-soldier" goes awry. Using an exotic virus found deep in the South American jungle, scientists have discovered that it has the ability to bestow vast strength and instantaneous healing abilities on humans, with one serious side effect: it turns its victims into bloodthirsty (literally) monsters. This door-stopper of a novel is such an homage to Stephen King's The Stand (in length as well as plot), along with Firestarter and even Salem's Lot, that it required some fact-checking to ascertain it was not written under a new King pseudonym. Expect a lot of interest in this title, as the publisher intends a massive publicity blitz, including national advertising, online promotions (including a special Web site and sweepstakes), and an author tour. Copyright 2010 Booklist Reviews.

Challenged by his daughter to write the story of a little girl who saves the world, PEN/Hemingway award winner Cronin forsook his literary persona (but not his excellent style) to craft a high-end sf story. In an experiment gone awry, the subjects escape-including young Amy-and they all carry a deadly virus that nearly destroys humanity. Big stuff is expected, so be ready to buy extras. With a 15-city tour. (See "Spring Editors' Picks," p. 28.) Copyright 2010 Reed Business Information.

A human-created virus has infected humankind, mutating most into superstrong, near-immortal vampiric creatures. The "virals"—also called "jumpers" and "dracs" (after Dracula, of course)—can leap 20 feet through the air at a bound and split a human (or a horse, or a cow) in half with their bare hands. A small band of men and women embark on a cross-country trek, looking for a way to protect the few remaining uninfected humans from extinction. With them travels an enigmatic prepubescent girl who talks to the virals with her mind and seems to have been born 100 years before. VERDICT The monsters in this compulsive nail biter are the scariest in fiction since Stephen King's vampires in Salem's Lot. Although the novel runs 700 pages, Cronin is a master at building tension, and he never wastes words. Shout it from the hills! This exceptional thriller should be one of the most popular novels this year and will draw in readers everywhere. [See a profile of Cronin in "Editors' Spring Picks," LJ 2/15/10; see also Prepub Alert, LJ 2/15/10; 15-city author tour.]—David Keymer, Modesto, CA

Fans of vampire fiction who are bored by the endless hordes of sensitive, misunderstood Byronesque bloodsuckers will revel in Cronin's engrossingly horrific account of a post-apocalyptic America overrun by the gruesome reality behind the wish-fulfillment fantasies. When a secret project to create a super-soldier backfires, a virus leads to a plague of vampiric revenants that wipes out most of the population. One of the few bands of survivors is the Colony, a FEMA-established island of safety bunkered behind massive banks of lights that repel the "virals," or "dracs"—but a small group realizes that the aging technological defenses will soon fail. When members of the Colony find a young girl, Amy, living outside their enclave, they realize that Amy shares the virals' agelessness, but not the virals' mindless hunger, and they embark on a search to find answers to her condition. PEN/Hemingway Award–winner Cronin (The Summer Guest) uses a number of tropes that may be overly familiar to genre fans, but he manages to engage the reader with a sweeping epic style. The first of a proposed trilogy, it's already under development by director Ripley Scott and the subject of much publicity buzz (Retail Nation, Mar. 15). (June)