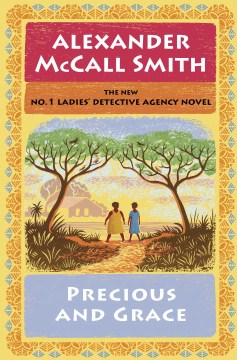 *Starred Review* This seventeenth installment of McCall Smith's wildly popular No. 1 Ladies' Detective Agency series is that rare find in a long-running series: a book that can appeal both to newcomers and to longtime fans. The opening pages, in which Mma Precious Ramotswe, who founded and owns the only detective agency in Botswana, drives her beloved, battered white van along the bumpy road to her office and thinks about the people in her life, both living ("in some cases, only too obviously present") and dead, is a brilliant reconstruction of the previous 16 novels' major characters. For those familiar with the series, it's like meeting old friends, with nice touches that appear in every novel, including the 97 grade that Precious' one-time secretary and now co-director, Mma Grace Makutsi, earned at the Botswana Secretarial College and brings up in nearly every conversation. Much of this book shows the prickly, comic-yet-loving relationship between Precious and Grace, with Precious nimbly sidestepping Grace's massive ambition. There is a central case, that of a woman from Canada who grew up in Botswana and wants to find her old home. There's also a local pyramid scheme that threatens to sink a part-time, sad-sack employee of the agency. But these cases lead to what is most fascinating in McCall Smith's writing—the way he uses clients' problems as a springboard into wise Precious' reflections on how to live. As always, a marvelous mix of humor, startling incidents, contemporary African setting, and memorable characters.HIGH-DEMAND BACKSTORY: A long-running series with a built-in audience that always craves more—the recipe for success in crime fiction. Copyright 2016 Booklist Reviews.

In her 17th outing, Botswana lady detective Precious Ramotswe has a big case on hand: helping a Canadian woman raised partly in Botswana find a long-lost friend. With codirector Grace Makutsi helping their assistant Mr. Polopetsi disentangle himself from a pyramid scheme and second assistant Charlie wrapped up in a hot romance with a woman the others distrust, Mma Ramotswe is on her own. With a ten-city tour.

"Forgiveness is often the solution," observes Precious Ramotswe toward the end of Smith's warmhearted, humane 17th No. 1 Ladies' Detective Agency novel (after 2015's The Woman Who Walked in Sunshine). Mma Ramotswe is referring to the book's main case, which involves a Canadian woman in her late 30s, Susan, who spent her childhood years in Botswana and now wants to find Rosie, the nurse maid largely responsible for raising her. Mma Ramotswe places an ad in a Gaborone newspaper, which brings a woman who claims to be Rosie to the detective agency. Grace Makutsi, the agency's prickly codirector, suspects this Rosie is a fraud, while Mma Ramotswe senses something not quite right about Susan's quest. Meanwhile, the ladies deal with a couple of minor cases: their assistant Fanwell rescues a stray dog that needs a home, and Mr. Polepetsi, their sometime helper, becomes an unwitting pawn in a pyramid scheme involving cattle. As ever, Smith adroitly mixes gentle humor with important life lessons. Agent: Robin Straus, Robin Straus Agency. (Nov.)