Grief is the thing with feathers : a novel / Max Porter. 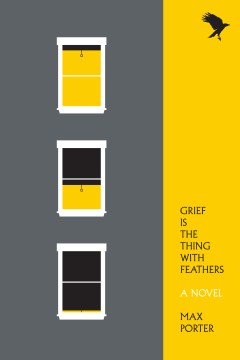 *Starred Review* After the death of Sylvia Plath, Ted Hughes published Crow: From the Life and Songs of the Crow (1970), a book of poetry that invoked world mythologies and folklore and is largely considered to have ushered in an important second stage in his career. Drawing on the myth of Crow, Porter delivers a staggering tale of a father grappling with the sudden loss of his wife in this sharply poetic and darkly stunning debut novel. Dad, a Hughes scholar, struggles to tend to his sons and complete his next manuscript, all the while plagued by the talkative, awful, and hilarious Crow. The embodiment of grief, Crow speaks in nonsense singsong that becomes increasingly eerie in its relentless humor. The Boys narrate from various points in their lives, uncomprehending children one moment, compassionate adults the next, never one or the other speaking, always both together, undifferentiated. This masterful ploy unhinges the story from any singular point of view, enabling the novel to float, unfixed in time. The result is a truly exceptional work of fiction, published in the UK last year to widespread acclaim. Readers will not soon forget Porter's distinct style, which evokes the excruciating intimacy of American novelist Justin Torres (We the Animals, 2011). Copyright 2014 Booklist Reviews.

In this remarkable debut, a man grief-stricken by his wife's sudden death stumbles around the house, ignoring his writings on Ted Hughes's poetry and unable to care for his two boys. Then he answers the door and is whacked backward by a huge, decayed-smelling crow, the mystical black embodiment of his sorrow. A self-described trickster there both to torment the man ("For a little break in the mourning, I will give you something to think about") and to push him through his suffering, Crow speaks oracularly in shimmering passages that alternate with those of Dad and Boys. VERDICT Like a prose poem in its splendid language but with its own swift flow, this is highly recommended for ambitious readers.

Porter's first novel is a heartbreaking and life-affirming meditation on the dislocating power of grief. Events are presented from the viewpoint of three characters: a recently widowed dad, his two young boys, and a talking crow who, like Poe's raven, roosts in their house as a tangible symbol of the family's need to come to terms with their loss. The husband has been recently contracted to write a study of Ted Hughes's Crow (written after the death of Sylvia Plath, who is also referenced here), and like the Hughes's trickster Crow, this Crow shifts shape and personality to address the changing needs of the different family members. Porter's characters express their feelings through observations that are profound and simply phrased. The dad recalls the harmonious feeling of lives shared early in his marriage, "when our love was settling into the shape of our lives like cake mixture reaching the corners of the tin as it swells and bakes." The boys, dismayed at how protectively adults coddle them against the reality of their mother's death, wonder, "Where are the fire engines? Where is the noise and clamour of an event like this?" The powerful emotions evoked in this novel will resonate with anyone who has experienced love, loss, and mourning. (June)

Falling out of timeGrossman, David

Lincoln in the bardoSaunders, George, 1958-

And every morning the way home gets longer and longerBackman, Fredrik, 1981-