Murder on the Quai / Cara Black. 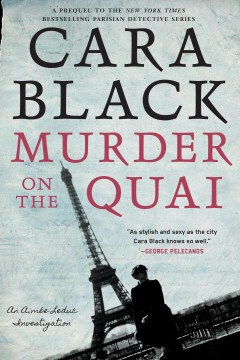 Over 15 novels in her much-loved Aimée Leduc series, Black has distributed tantalizing facts about Aimée's background, but, damn it, we want more: What's the real story behind Aimeé's mother's disappearance? What about her father's murder? How did she meet her partner Rene? And so much more. Apparently, Black has listened to our yowlings of frustration because finally we have the prequel we've been craving. It's 1989, and Aimeé is a medical student, though dissatisfaction with her chosen field is growing. Her father is off to Berlin on an unexplained errand that has something to do with Aimeé's mother. Meanwhile, Aimeé, supposedly helping out with paperwork at the family detective agency, is drawn into a case involving a distant relative and Nazi gold stolen during WWII. The trouble with many prequels is that, in the interest of dispensing backstory, the author forgets to tell a new story. Black doesn't make that mistake here, with the WWII plot proving thoroughly involving, but let's face it: we're here for answers, and while all of them aren't quite forthcoming just yet, we learn plenty. A treat for series fans. Copyright 2014 Booklist Reviews.

In her new Aimée Leduc mystery (after Murder on the Champ de Mars), Black intriguingly returns to Aimée's detective beginnings in 1989 Paris, when she's a struggling medical student minding the family's detective business in her father's absence. Soon, she's investigating the execution-style murder of relative Bruno Peltier in a case linked to lost Nazi gold.

Set in 1989, bestseller Black's 16th Aimée Leduc investigation (after 2015's Murder on the Champs des Mars) is a prequel that tells the intriguing story of Aimée's debut as a detective. When Aimée's father, Jean-Claude, travels to Germany on business around the time of the fall of the Berlin Wall, he leaves Aimée, a first-year medical student who's struggling with academic failure and her boyfriend leaving her for another woman, temporarily in charge of the family-owned detective agency in Paris. Elise Pelletier, who claims to be Jean-Claude's second cousin, brings Aimée her first case. Elise wants to find the woman whose name and phone number were on a matchbook in the pocket of her dead father, Bruno, who was discovered tied and bound with a bullet in his head under the Pont des Invalides. As Aimée investigates, she becomes enmeshed in the murky history of the murder of four German soldiers in Vichy, France, during WWII. Series fans will enjoy learning more about Aimée's mysterious past. Agent: Katherine Fausset, Curtis Brown. (June)

The man on the washing machineCox, Susan R.