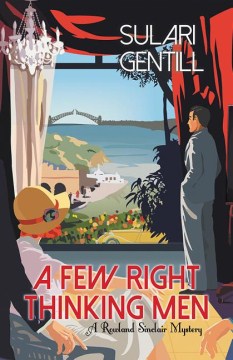 *Starred Review* The first installment of the Rowland Sinclair series (originally published in Australia in 2011) finds the artist and amateur sleuth looking into the murder of his own uncle. The book is set in the 1930s, an oft-used period by mystery writers. It does share some literary DNA with Kerry Greenwood's Phryne Fisher series—an independently wealthy protagonist, an Australian setting, a roughly similar time frame—but it would be a mistake to shrug the book off as a Greenwood wannabe. Gentill took a rather circuitous route to becoming a writer, studying astrophysics and then going into the law, but she writes as though she were born to it: gracefully, with a sharp eye for details in characterization and dialogue, and with an ability to keep us guessing about where, exactly, the story is headed. As series-launching novels go, this one is especially successful: the plot effectively plays Sinclair's aristocratic bearing and involvement in the arts against the Depression setting, fraught with radical politics, both of which he becomes involved in as he turns sleuth. And Sinclair himself is a delight, wining us over completely and making us feel as though he's an old friend. Copyright 2014 Booklist Reviews.

In 1931 Sydney, Australia, unemployment is high and tension is mounting, especially among working people who feel the upper class are handing them a raw deal. Rowland ("Rowly") Sinclair was born with a silver spoon in his mouth, but has taken up the mantle of gentleman communist. He is, after all, a bohemian artist. His older brother is embarrassed by Rowly, but when their elderly uncle is murdered at home, Rowly sets out to uncover who might have wanted a sweet old man dead. As Uncle Rowly was a silent partner in a speakeasy, gangsters might have had it out for him, but our sleuth soon learns that fascist politicians make bad bedfellows. While the vintage Down Under settings might make this debut, which was short-listed for the Commonwealth Writers' Prize Best First Book, comparable to Kerry Fisher's Melbourne-based Phryne Fisher 1920s mysteries, Gentill works in historical events that add verisimilitude to her story. There are more political machinations going on here than Phryne could ever contemplate. VERDICT Thanks to Poisoned Pen Press for bringing another award-winning Australian crime writer to U.S. shores. Her witty hero will delight traditional mystery buffs.

Gentill's well-mannered first novel in a series set in Depression-era Australia introduces gentleman painter Rowland "Rowly" Sinclair, the somewhat emotionally reserved youngest son of a moneyed family. Rowly's pursuit of his artistic path and financial support of several similar-minded creative friends are causes of concern to his older brother and their peers, "right-thinking men" who suspect Rowly's associates of Communist leanings or worse. When Rowly's uncle, also named Roland Sinclair, dies after being assaulted in his Sydney home, the police suspect the elderly housekeeper, in collusion with other disenfranchised elements, despite the housekeeper's reported sighting of mysterious dark figures at the scene. Convinced the police are pursuing the wrong path, Rowly looks deeper into his uncle's holdings and interests. Gentill's positioning of Rowly as an observer of the personal consequences of political actions targeting the privileged and the not so fortunate helps inform the sometimes dry narrative. (June)

A spectacle of corruptionLiss, David, 1966-

The refuge: a confessionMackenzie, Kenneth, 1913-1955
Death in the ladies' goddess clubLeatherdale, Julian