The last time she saw him / Jane Haseldine. 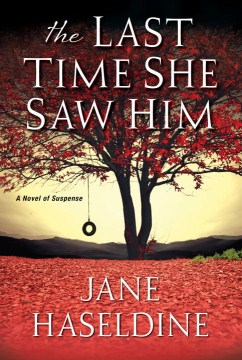 Julia Gooden, the heroine of this ferocious thriller, is a Detroit crime reporter. She's the narrator, too, offering a first-person, up-close look at the slippery ways of the newspapering trade and giving the details of her tense, violent narrative a visceral punch that can rock even the jaded. Julia was tiny when her older brother was kidnapped. Now that she's a mom she obsesses that her two youngsters will endure the same fate. When it happens to one of them, we get to watch the hard-edged reporter crank up. She flirts with the handsome homicide detective and tricks his too-trusting staffer. She mocks and humiliates a big-haired psychic, whose revelations jar her to her core. She bluffs her way into a prison to grill a convict who might know something and gets so far ahead of the cops that it's almost her undoing. The last 80 pages, with guns, a knife, an axe, a knitting needle, and a river of blood, may strike some as over the top. But you can bet no one will stop reading. Copyright 2014 Booklist Reviews.

Thirty years ago, Julia Gooden's nine-year-old brother Ben—her older confidant and protector—vanished from the room they shared. Much to her frustration, Julia remembers nothing of the incident, but the unsolved crime now haunts her adult world. Dogged with unresolved guilt that she can't vocalize, Julia becomes a reporter because she "never found out the ending to [her] own story." She supervises her two sons with frantic and unhealthy fervor, enough to cause a rift in her crumbling marriage. The mental and emotional lingering of Ben's abduction becomes frighteningly tangible, however, when Julia's own two-year-old son, Will, is snatched from his bed on the anniversary of Ben's disappearance. Julia is convinced the abductions are related. But to find her son, she must also find herself. VERDICT Haseldine's first novel is a solid read that fans of Debbie Howells, Julia Dahl, and Laura Lippman will appreciate.—Erin Entrada Kelly, Philadelphia

Reporter Julia Gooden, the smart, relatable heroine of journalist Haseldine's uneven debut, needs a break from her job at a Detroit newspaper. She finds peace at her vacation home on Lake St. Clair, Mich., with her two sons, Will and Logan. On the 30th anniversary of the 1977 disappearance of her brother, Ben, two-year-old Will is taken from his bed; the clues left are shockingly similar to those left at the scene of Ben's abduction. In addition to recruiting the help of ex-boyfriend Det. Ray Navarro and estranged husband David, Julia decides to take matters into her own hands. In the next 24 hours or so, Julia manages to have a press conference, illegally search a suspect's home, help search 30 acres of property, sit in on two interrogations, make a prison visit to someone who may have information about Will, and more. This improbable sequence takes credibility away from what is, for the most part, a competently written thriller—at least until the gruesome final showdown, which borders on the ridiculous. Agent: Priya Doraswamy, Lotus Lane Literary. (July)