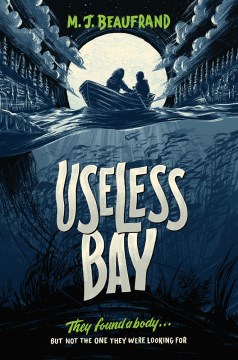 Marilyn Monroe "Pixie" Gray is the youngest—and only girl—of the 17-year-old Gray quintuplets. The quints have achieved near-folk status on Whidbey Island, Washington, for their size, strength, and seemingly effortless ability to do anything. They all have their specialties, though, and Pixie and her bloodhound, Patience, lead search-and-rescue missions. When their summer neighbors, the Shepards, lose the youngest of their children, Pixie and her brothers are called in. Everyone expects Grant to be hiding to avoid going back to the mainland, until they find Mrs. Shepard's body and realize the family is being targeted. As Pixie investigates, she learns that Henry Shepard, the oldest son and Pixie's best friend, might know why. This crisp psychological thriller has touches of magic realism that harmonize with Whidbey Island's breathtaking natural environment, with the bulk of the action happening on a stormy night. The quints are an irresistible presence, and while the story has a few dubious plot twists, its intensity and simple, evocative prose make this a solid choice for reluctant readers who want a dark, atmospheric mystery. Copyright 2016 Booklist Reviews.

On Washington's Whidbey Island, the Gray quintuplets, including sixteen-year-old Pixie, live next to Henry's wealthy family's vacation home. When Henry's younger stepbrother goes missing, search-and-rescue efforts instead turn up Henry's murdered stepmother. As Pixie and Henry gradually discover the murderer, skeletons tumble out of the closet. The setting is atmospheric, and the narrative, which follows Pixie and Henry in alternating chapters, is suspenseful. Copyright 2017 Horn Book Guide Reviews.

In this stellar mystery from Beaufrand (The Rise and Fall of the Gallivanters), 17-year-old quintuplets investigate a death on Whidbey Island in Washington State. Marilyn Monroe "Pixie" Gray has a reputation for finding things (including missing people) with the help of her bloodhound, Patience, and her rough-and-tumble brothers, Dean, Lawford, Sammy, and Frank, all named after members of the Rat Pack. When 10-year-old Grant, the younger brother of Pixie's friend Henry Shepherd, disappears, Grant's millionaire father is frantic; Pixie's discovery of a body kicks off a dangerous series of events with consequences for both families. The narrative alternates between the perspectives of Pixie and Henry, highlighting Pixie's sly sense of humor, as well as her love for her family and their beloved island home; Henry, meanwhile, harbors a dark childhood secret that may come to the surface. Short in length but long on atmosphere, it's a gripping mystery with a supernatural overlay that makes its setting all the more haunting. But it's the irresistible Gray quints, subject to their own rumors and local mythos, who steal the show. Ages 13–up. Agent: Steven Chudney, Chudney Agency. (Oct.)

The girl I used to beHenry, April

Confessions of a murder suspectPatterson, James, 1947-

No such personCooney, Caroline B.

The road of the deadBrooks, Kevin

The lovely and the lostBarnes, Jennifer (Jennifer Lynn)

The edge of nowhereGeorge, Elizabeth, 1949-