99 : stories of the game / Wayne Gretzky, with Kirstie McLellan Day. 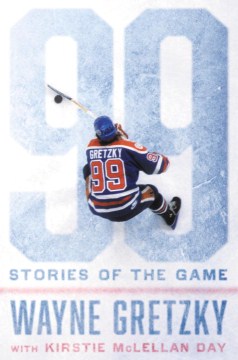 *Starred Review* Gretzky is one of the half-dozen greatest hockey players of all time. He's also a student of the game and its history. He believes that every young player who enters the NHL is suddenly in the presence, either as an opponent or a teammate, of at least one idol. The idols and the newcomers will share stories and pass along anecdotes of other players, games, and histories. It's one of the game's charms and exactly what Gretzky tries to do in this collection of memories of a life in hockey. Among the stories he includes (more than 99—that was his jersey number), there are looks at various team histories as well as a nod to the World Hockey Association, founded in 1971, which opened the sport to European players and transformed hockey from a niche sport into a major attraction. He also offers some new insights into the 1980 Miracle on Ice, in which the underdog American hockey team won Olympic gold. Some of the stories Gretzky tells involve him but usually in a minor way. This is not a memoir or the slightest bit self-aggrandizing. It's a great player doing his best to explain why he loves his sport. One of the most enjoyable hockey books to be published in many years. Copyright 2016 Booklist Reviews.

Gretzky (b. 1961), #99, nicknamed "The Great One," and arguably the best player in the history of hockey, has written a warm and enthusiastic collection of memories and stories to celebrate the National Hockey League's (NHL) 99th anniversary. Despite being the leading scorer in NHL history and holding dozens of league records, Gretzky here retains the same youthful passion for the game that he had growing up in Brantford, Ontario, watching his hero Gordie Howe. Part memoir and part history, this book is a fun, positive, and sometimes humorous salute to all of the people who have made hockey great over the past century. Starting with the NHL's first star, Howie Morenz, and meandering up through the present day, Gretzky spins stories about the people, places, and events that have shaped the sport. Throughout, whether discussing the Stanley Cup, Bobby Hull's slap shot, or hockey's greatest dynasties (such as the legendary Edmonton Oilers teams he was a part of), this book showcases some of hockey's best moments through the keen eyes of an avid student, lover, and ambassador of the game. VERDICT Essential for all hockey fans, old and new.—Brian Sullivan, Alfred Univ. Lib., NY. Copyright 2016 Library Journal.

The best seat in the house: stories from the NHL--inside the room, on the ice-- and on the benchMcLennan, Jamie, 1971-

The boys of winter: the untold story of a coach, a dream, and the 1980 U.S. Olympic hockey teamCoffey, Wayne R.

Crossing the line: the outrageous story of a hockey originalSanderson, Derek, 1946-

Cujo: the untold story of my life on and off the iceJoseph, Curtis, 1967-