The Sun Is Also a Star [electronic resource] : Yoon, Nicola. 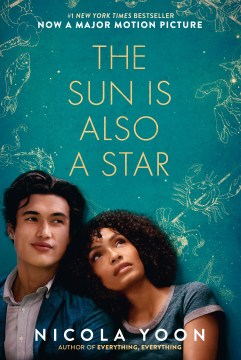 *Starred Review* On a summer morning in New York City, Daniel and Natasha wake up as strangers. This is a day that could catapult their lives into entirely new directions that neither of them wants to take. Natasha has only hours left to prevent her family's deportation to Jamaica, after a minor legal infraction jeopardizes their stay in the U.S. Daniel dreads sealing his fate with an alumni interview that will pave his way to a career in medicine, as his Korean family expects. Despite a day packed with Natasha's desperate race against time and a tangled system, and Daniel's difficult tug-of-war between familial pressures and autonomy, love finds a way in, takes hold, and changes them both forever. Yoon's sophomore effort (Everything, Everything, 2015) is carefully plotted and distinctly narrated in Natasha's and Daniel's voices; yet it also allows space for the lives that are swirling around them, from security guards to waitresses to close relatives. It's lyrical and sweeping, full of hope, heartbreak, fate, and free will. It encompasses the cultural specifics of diverse New York City communities and the universal beating of the human heart. Every day—like every book—begins full of possibility, but this one holds more than others. HIGH-DEMAND BACKSTORY: Yoon's debut became a best-seller, so the publisher is giving this a strong push that includes a national author tour. Copyright 2014 Booklist Reviews.

Natasha, an undocumented immigrant from Jamaica facing immediate deportation, believes in science and rationality. Daniel, burdened with his Korean-immigrant parents' expectations, believes in destiny and poetry. When their paths cross unexpectedly, and repeatedly, over one day, Daniel is convinced he's going to fall in love. In a twelve-hour race against the clock, the teens' alternating first-person narratives are fresh and compelling. Copyright 2017 Horn Book Guide Reviews.

New York City high school senior Natasha believes in science and rationality. An undocumented immigrant from Jamaica, she and her family are facing immediate deportation thanks to her father's DUI arrest. Daniel believes in destiny and poetry. Burdened with his Korean-immigrant parents' expectations, he is appeasing them by applying to Yale, where he will study to become a doctor. But when Natasha's and Daniel's paths cross unexpectedly, and repeatedly, over the course of a day, Daniel is convinced: he is experiencing "love at second sight…the feeling when you meet someone that you're going to fall in love with them." Soon, it's a twelve-hour race against the clock: can Daniel get Natasha to fall in love with him before their time together ends? Can Natasha get the help of an immigration lawyer to stay her deportation? And what will happen if she really does have to leave the country that night? The teens' alternating first-person narrations are fresh and compelling, and interspersed throughout are relevant third-person omniscient musings on various histories, from the past and future histories of some of the book's secondary characters to the chemical history of love to a quantum theory of multiverses. Fans of Eleanor & Park (rev. 5/13) and The Fault in Our Stars (rev. 3/12) are destined to fall for Daniel and Natasha as quickly as they fall for each other. kazia berkley-cramer Copyright 2016 Horn Book Magazine Reviews.

Is it fate or chance that brings people together? This is the question posed in this impressively multilayered tale of a one-day romance featuring practical Natasha, whose family is facing deportation to Jamaica, and Daniel, a first-generation Korean American with a poet's sensibility. The teens' eventful day begins at a New York City record store, where they see someone shoplifting. It's the first of many significant moments that occur as Natasha desperately seeks aid to stay in America and Daniel prepares for a college interview with a Yale alum. Drawn together, separated, and converging again, both teens recognize with startling clarity that they are falling in love. With a keen eye for detail and a deep understanding of every character she introduces, Yoon (Everything, Everything) weaves an intricate web of threads connecting strangers as she delves into the personal histories of her protagonists, as well as the emotions and conflicts of others who cross their paths. A moving and suspenseful portrayal of a fleeting relationship. Ages 12–up. Agent: Sara Shandler and Joelle Hobeika, Alloy Entertainment. (Nov.)