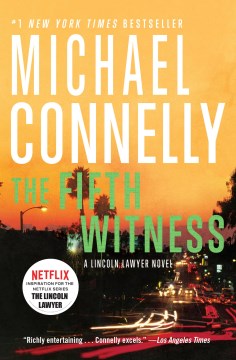 *Starred Review* Crime-fiction megastar Connelly can always be counted on to try something a little different. In The Reversal (2010), his last Mickey Haller novel, starring the L.A. lawyer who prefers to work out of his Lincoln Town Car, Connelly offered a tour de force of plotting on multiple levels. Here, he narrows the focus considerably, concentrating almost exclusively on what happens inside the courtroom but bringing to the traditional give-and-take of prosecutor, defender, judge, and jury an altogether more complex commingling of personality and legal strategy than is typically on view in legal thrillers. He accomplishes this with a particularly rich first-person narration in which Haller takes us through the courtroom drama as it happens, noting his blunders and praising himself for quick-thinking improvisations. It doesn't hurt, either, that the plot is meaty: a woman whom Haller was representing in a suit against the bank attempting to foreclose on her mortgage is accused of killing the bank official in charge of foreclosures. Combining ripped-from-the-headlines information on the mortgage crisis with a cast of characters that defies stereotypes at every turn of the plot, Connelly shows once again that he will never simply ride the wave of past success. And, neither, apparently, will Mickey Haller, as he reveals a shocking change of direction in the novel's final pages. HIGH-DEMAND BACKSTORY: Connelly's latest Mickey Haller novel will benefit from the release in March of a movie version of The Lincoln Lawyer, the first Haller novel, starring Matthew McConaughey. 750,000 first printing. Copyright 2011 Booklist Reviews.

Connelly continues his winning streak with his latest thriller featuring attorney Mickey Haller (The Lincoln Lawyer). Lisa Trammel has hit the skids. Her husband took off, leaving her alone with a child. Her salary as a teacher is not enough to pay the mortgage, and the result is foreclosure. Trammel approaches Haller for help trying to save her home. Soon after, the person at the bank responsible for the foreclosure is found murdered in a parking garage next to his office. Within hours, Trammel is in jail, and Haller has to maneuver his way through more than potential bank fraud to prove his client's innocence. VERDICT When did Connelly become the best legal thriller writer in the business? The story line is compelling, intense, and terrifying while providing an in-depth look at the mortgage crisis that is surprisingly interesting. With the film version of The Lincoln Lawyer scheduled for release March 18, expect high demand. [See Prepub Alert, LJ 11/15/10.]—Jeff Ayers, Seattle P.L.

No, not Harry Bosch but Mickey Haller, who's done so well (starting with The Lincoln Lawyer in 2005) that Connelly keeps bringing him back for more. In this up-to-the-minute thriller, criminal defense attorney Haller has taken on foreclosure work, which creates complications; one of his clients is accused of killing the banker threatening to foreclose on her home. Buy multiples.

Connelly's compelling fourth legal thriller featuring Mickey Haller (after Reversal) finds the maverick L.A. lawyer who uses his Lincoln town car as an office specializing in "foreclosure defense." Haller's first foreclosure client, Lisa Trammel, is fighting hard to keep her home, maybe too hard. The bank has gotten a restraining order to stop Trammel's protests, and she becomes the prime suspect when Mitchell Bondurant, a mortgage banker, is killed with a hammer in his office parking lot. A ton of evidence points to Trammel, but Haller crafts an impressive defense that includes "the fifth witness" of the title. Connelly has a sure command of the legal and procedural details of criminal court, and even manages to make the arcane, shady world of foreclosure interesting. While the prose may lack some of the poetic nuance of his early novels, the plot is worthy of a master storyteller. The film of The Lincoln Lawyer, the first Mickey Haller novel, releases in March. (Apr.)