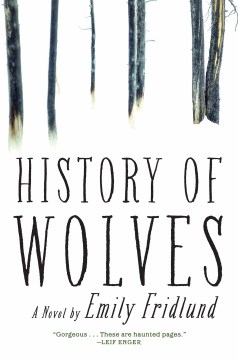 *Starred Review* Fraught with foreboding, Fridlund's first novel is the story of 14-year-old Linda, who lives with her erstwhile cult-member parents in a cabin in the northern Minnesota woods. When new neighbors, the Gardners, move into their summer cottage across the lake, Linda becomes babysitter for their five-year-old son and an increasingly large presence in their lives—and they in hers. In the meantime, her new history teacher, Mr. Grierson, has been found to possess child pornography and is fired, but not before he has an alleged affair with one of Linda's classmates, the beautiful Lily with whom Linda is fascinated. The novel moves backward and forward in time to good effect, showing us the enigmatic adult Linda will become. The isolated setting reinforces a theme of loneliness that pervades the book and lends it an often bleak, even desolate, air that reinforces the uncertain, nagging knowledge that something is wrong with the Gardners. The writing is beautiful throughout ("the sun broke over the treetops, turning every surface into a flat knife of light"; a man is stubborn "like a stain") and is a triumph of tone and attitude. Lovers of character-driven literary fiction will embrace this one. Copyright 2016 Booklist Reviews.

Winner of the McGinnis-Ritchie award for its first chapter, this BEA Buzz book features 14-year-old social outcast Linda, living with her post-commune parents in Minnesota's northern woods. Soon she realizes that the personal beliefs of the couple for whom she babysits are threatening the well-being of their child.. Copyright 2016 Library Journal.

Teenager Linda lives near the Walleye Capital of the World, but no one would mistake her Minnesota town for Lake Wobegon. In this chilling story, Linda looks back on her troubled school years, when she was caught up in situations beyond her control or comprehension. The girl's parents are the last holdouts of a failed commune on a northern lake; the family lives in an isolated shack on the town's outskirts with four dogs chained up outside. When Linda takes a job babysitting a little boy named Paul, whose parents have moved in down the road, Paul becomes attached to her. Then something goes horribly wrong and his parents, too, are no help. Indeed, the wolves that Linda is so fascinated by might do a better job of parenting than the clueless adults in this novel. VERDICT Fridlund is a fine writer who excels at getting inside the head of an unhappy youth and revealing how neglect and isolation scar a child for life. Yet this first novel, as cold and bleak as a Minnesota winter, may be too dark for some readers. [See Prepub Alert, 7/25/16.]—Leslie Patterson, Rehoboth, MA. Copyright 2016 Library Journal.

In Fridlund's stellar debut novel, 14-year-old Linda, an observant loner growing up in the Minnesota woods, becomes intrigued with the Gardners, the young family that moves in across the lake from her home. As she gets to know them, she realizes that something is amiss. Having been raised in a commune by unconventional parents, Linda is prone to provocative statements and challenging authority. She's also fascinated by the scandal that occurs when Lily Holburn, a student at her school, accuses a teacher, Adam Grierson, of inappropriate behavior but then recants her testimony. At the same time, Linda forges a friendship with the comparatively worldly Patra Gardner and her endearing four-year-old, Paul, whom Linda babysits for a summer before his sudden and mysterious death. Matters take a curious turn once Patra's husband, an older man named Leo, returns after months away at work. Fridlund expertly laces Linda's possessive protectiveness for Patra with something darker, bordering on romantic jealousy. A sense of foreboding subtly permeates the story as Fridlund slowly reveals what happened to Paul. Her wordsmithing is fantastic, rife with vivid turns of phrase. Fridlund has elegantly crafted a striking protagonist whose dark leanings cap off the tragedy at the heart of this book, which is moving and disturbing, and which will stay with the reader. Agent: Nicole Aragi, Aragi Inc. (Jan.) Copyright 2016 Publisher Weekly.

Coming of age at the end of daysLaPlante, Alice, 1958-