The door that led to where / Sally Gardner. 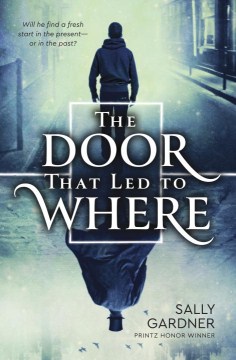 After acing his English exam and failing every other one, AJ feels fortunate when his knowledge of Dickens' novels helps him land a job as an office boy at Baldwin Groat, a London law firm. The old place holds secrets, though, and among them are a mysterious old key, the identity of AJ's father, and a means of time travel into London circa 1830. Mr. Baldwin's murder looms over the narrative. After AJ helps his two best friends by hiding them in the nineteenth century, a decision with lasting repercussions, he must decide where—or rather when—he will lead his life. Gardner, author of the Printz Honor Book Maggot Moon (2013), offers a genre-blending novel with elements of contemporary realism, fantasy, historical fiction, murder mystery, and romance. The settings and characters are vividly drawn. Resourceful and reflective, AJ makes a sympathetic protagonist, initially trying to make the best of his meager options, then trying to comprehend what's happening around him, and finally taking an active role in setting things right. An original time-travel novel. Copyright 2016 Booklist Reviews.

In contemporary London, AJ Flynn, working as a junior clerk at a law firm, discovers a key that leads him to the past--a past in which there are opaque connections between his 1830s acquaintances and his contemporary employers. Murder, madness, forgery, poverty...it's all here. Gardner's prose, peppered with colorful metaphors and period language, moves the plot along quickly. Copyright 2016 Horn Book Guide Reviews.

Channeling Leon Garfield or Joan Aiken, perhaps, Gardner (I, Coriander, rev. 11/05; Maggot Moon, rev. 3/13) sets this murder mystery and coming-of-age novel partly in contemporary London and partly in the sordid, conniving underworld of the same city in 1830. In the modern world, AJ Flynn, abused, fatherless, a boy whose friends are other at-risk teens, is amazed to be offered a junior clerk position at a reputable London law firm. While doing some filing, he discovers a key that leads him to the past -- a past in which his name is known, his father was a familiar figure, and there are opaque connections between his new 1830s acquaintances and his contemporary employers. Murder, both now and then; madness, bereavement, forgery, poverty; a cryptic will…Gardner throws it all in, resolving AJ's family issues and finding a welcome place and time for AJ's misfit friends as well. Gardner's prose, peppered with colorful metaphors and period language, moves the plot along quickly, sketching out a pungent, vivid world in both present and past. deirdre f. baker

A.J. Flynn's future looks bleak: his grades are less than desirable, his home life is rocky, and his friends Leon and Slim are always in and out of trouble. When A.J. is offered a job as a junior clerk at a London law firm, things take a turn for the extraordinary. Finding a peculiar key labeled with his name and birthday leads 17-year-old A.J. to a nondescript door that transports him to 1830s London, where secrets about his paternity and family history are revealed. But the magic of time travel is tempered by murders in the past and in the present, as well as the harsh realities of the lives of A.J. and his friends. A.J., Leon, and Slim begin Gardner's novel as boys from whom society expects nothing but trouble, but when they are presented with an opening to make something of themselves, they seize it, powerfully illustrating the good that can come out of opportunity and second chances. Skillfully blending time travel, intrigue, and social commentary, Gardner (Maggot Moon) delivers a thought-provoking page-turner. Ages 12–up. Agent: Catherine Clarke, Felicity Bryan Associates. (Nov.) Copyright 2016 Publisher Weekly.