The bear and the nightingale : a novel / Katherine Arden. 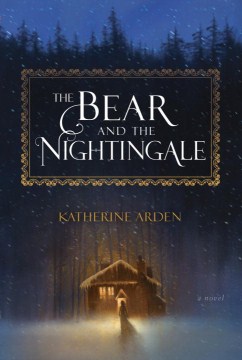 *Starred Review* Gracefully threaded with Russian fairy tales and a tactile sense of place, Arden's debut tells the story of Vasya, daughter of a supposed witch, in the northern reaches of medieval Russia. As a child, Vasya's conversations with wood sprites and household spirits were an odd, but tolerable, feature, but when her father marries deeply pious, troubled Anna, Vasya learns to keep her otherworldly friends a secret. They don't stay secret for long, however: a fanatical priest quickly catches on, and he becomes obsessed with Vasya's salvation, while Anna roils with anger over her stepdaughter's brazen disregard for propriety. Most treacherous of all, two supernatural beings, Morozko and Medved, see powerful opportunities in Vasya's gifts. And while Vasya tries to ward off Medved's nefarious grasp on her village, political rumblings from Moscow threaten their status quo, and the villagers become wary of Vasya's inexplicable talents and boldness. In a lush narrative with the cadence of a fairy tale, Arden weaves an immersive, earthy story of folk magic, faith, and hubris, peopled with vivid, dynamic characters, particularly clever, brave Vasya, who outsmarts men and demons alike to save her family. This beautifully written, auspicious first novel is utterly bewitching. Copyright 2016 Booklist Reviews.

A darkly magical fairy tale for adults, this debut takes us to the edge of Russia's immense wilderness, where Vasilisa loves hearing her nurse's old-time stories. Alas, her citified new stepmother bans anything she sees as superstition, with catastrophic results Vasilisa must counter with hidden gifts.. Copyright 2016 Library Journal.

You don't have to know and love Russian folklore to appreciate Arden's fabulist—and fabulous—debut novel, which tells the story of how Vasilisa Petrovna, a village girl with royal bloodlines and more mysterious, magical antecedents, saves her corner of medieval Russia's wild north and effectively all humankind. At her rich boyar father's house, little Vasilisa delights in her old nurse's tales about Morozko, the death-god, the frost-king, who spares a maiden unafraid of him. Vasilisa, whose mother died in childbirth, runs wild as a child and cannot be reined in by her God-fearing new stepmother, brought from Moscow and terrified because she sees—and resists—her new home's house spirits. Vasilisa has befriended them and the woodland spirits, but the arrogant new priest inveighs fiercely against the old beliefs, and the ever-helpful spirits weaken as the fearful villagers stop leaving them gifts. Soon, cold, starvation, and death creep into the community, and Vasilisa must battle the raging bear loosed by the villagers' perfidy and representing a fate worse than death. In fact, the frost-king, death himself, echoes the legendary stories by helping her. VERDICT Fleet and gorgeous as the firebird, a highly recommended exemplar of literary fantasy. [See Prepub Alert, 8/1/16.]—Barbara Hoffert, Library Journal. Copyright 2016 Library Journal.

Arden's debut is an earthy, beautifully written love letter to Russian folklore, with an irresistible heroine who wants only to be free of the bonds placed on her gender and claim her own fate in 14th-century Russia. Vasilisa "Vasya" Petrovna's mother, Marina, died while giving birth to her. Her father, Pyotr Vladimirovich, loves her; he also resents her for his beloved wife's death. But Marina made Pyotr promise to take good care of Vasya, saying that she was special, and indeed she is. While her father and brothers seek marriage arrangements among royalty in Moscow, Vasya, now a teenager, refuses to be married off; instead she wanders the verdant woods of her father's rural estate, communing with spirits of home, wood, and water. When a young, arrogant priest is sent to her village, the people turn away from their old ways, and the spirits that keep them safe begin to fade. It's up to Vasya to protect them, but her father marries Anna, the daughter of Grand Prince Ivan II, who believes the wood spirits are demons and wants to kill Vasya or confine her to a convent as punishment for consorting with them. As a fierce winter storm rages, Vasya must save her family while embracing the magic that lives inside her. The stunning prose ("The blood flung itself out to Vasya's skin until she could feel every stirring in the air") forms a fully immersive, unusual, and exciting fairy tale that will enchant readers from the first page. Agent: Paul Lucas, Janklow and Nesbit. (Jan.)

A discovery of witchesHarkness, Deborah E., 1965-

The city of brassChakraborty, S. A.

The queen of bloodDurst, Sarah Beth