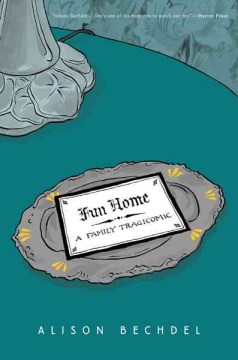 /*Starred Review*/ This is a father and daughter story. Bechdel's mother and two brothers are in it, of course, but Bruce Bechdel had the biggest impact on his eldest child and so is naturally the other main character in her autobiographical graphic novel. Emotionally and physically reserved, to the point of brusqueness, he busied himself restoring--and then some--the Victorian-era house he bought for the family in the Pennsylvania town in which he was born and lived virtually all his 44 years. He enlisted the kids for never-ending interior and exterior modifications of the place in what obviously was his major creative outlet. For a living, he taught twelfth-grade English and ran the small undertaking business that occupied part of his parents' house and that the kids called the fun home. Bechdel doesn't even hint about how ironic she and her brothers meant to be, because she is a narrative artist, not a moralist or comedian, in this book and because she has a greater, real-life irony to consider. After disclosing her lesbianism in a letter home from college, her mother replied that her father was homosexual, too. Alison suddenly understood his legal trouble over buying a beer for a teenage boy, all the teen male "helpers" he had around the house, and his solo outings during family vacations to New York. Bechdel's long-running Dykes to Watch Out For is arguably the best comic strip going, and Fun Home is one of the very best graphic novels ever. ((Reviewed March 15, 2006)) Copyright 2006 Booklist Reviews.

Bechdel offers a graphic memoir, if you will, about growing up with a remote dad who managed a funeral home (see the title) while hiding his homosexuality; the author herself came out as a teen. Bechdel's Dykes To Watch Out For comic strip is syndicated in 50 alternative publications. Copyright 2006 Reed Business Information.

Bechdel's masterwork is her two-decade award-winning strip, Dykes To Watch Out For, in 10 collected volumes. In that poignant yet hilarious story, Bechdel's inventive characters cope with career and health crises, lesbian psychodrama, and anti-Bush politics. With Fun Home, the artist draws her own story, also poignant, funny, and certainly real-life absurd. Mother is an actress turned housewife, while father teaches high school English and runs a funeral home (the â€œfun home,â€ the children call it mockingly) on the side. Young Alison is pressed into helping with funerals and renovations on their gothic house, while pretending, along with parents and brothers, that they are a normal family. Yet why did her parents hate each other? Why was father so histrionic and mother so distant? As she untangles these mysteries, Bechdel skillfully pivots the tale in repeat takes around her father's perhaps-suicide. Gradually the secret is revealed, partly in metaphors of literature that brought daughter and fatherâ€"now revealed as closeted gayâ€"together at last before his death. Highly recommended; libraries should also consider her earlier entertaining prose/comic hybrid on cartooning, The Indelible Alison Bechdel (Firebrand, 1998). With mature themes plus some nudity and sex; for older teens and adults. [See Prepub Alert, LJ 2/15/06).â€"M.C.

Bechdel, author of the award-winning comic strip Dykes To Watch Out For, paints her own story in this stunning graphic memoir. Her black-and-white line drawings, brushed with a blue wash, bring to life her childhood with her distant actress mother and her mysterious father, the proprietor of a funeral home. Bechdel's coming-out process is stifled when her father commits suicide, and she realizes that he, too, was gay. One of the best graphic memoirs to date, this book was the basis of a long-running off-Broadway play. (LJ 7/06)

Bechdel, author of the long-running comic strip Dykes To Watch Out For, has produced a brilliant memoir of her childhood with her closeted gay father. She describes the triumphs and many tragedies of growing up with a grace and intimacy that draws the reader in immediately. Her use of her childhood diaries, writings, and illustrations make this almost an archival work of her family's story and reveals the emotional torment Bechdel endured. (LJ 7/06) - "Drawing on Reality " LJ Reviews 2/2/2012 (c) Copyright 2011. Library Journals LLC, a wholly owned subsidiary of Media Source, Inc. No redistribution permitted.

This autobiography by the author of the long-running strip, Dykes to Watch Out For, deals with her childhood with a closeted gay father, who was an English teacher and proprietor of the local funeral parlor (the former allowed him access to teen boys). Fun Home refers both to the funeral parlor, where he put makeup on the corpses and arranged the flowers, and the family's meticulously restored gothic revival house, filled with gilt and lace, where he liked to imagine himself a 19th-century aristocrat. The art has greater depth and sophistication that Dykes; Bechdel's talent for intimacy and banter gains gravitas when used to describe a family in which a man's secrets make his wife a tired husk and overshadow his daughter's burgeoning womanhood and homosexuality. His court trial over his dealings with a young boy pushes aside the importance of her early teen years. Her coming out is pushed aside by his death, probably a suicide. The recursively told story, which revisits the sites of tragic desperation again and again, hits notes that resemble Jeanette Winterson at her best. Bechdel presents her childhood as a "still life with children" that her father created, and meditates on how prolonged untruth can become its own reality. She's made a story that's quiet, dignified and not easy to put down. (June)

Fairyland: a memoir of my fatherAbbott, Alysia

Can't we talk about something more pleasant?Chast, Roz

You are not a stranger hereHaslett, Adam