Her every fear / Peter Swanson. 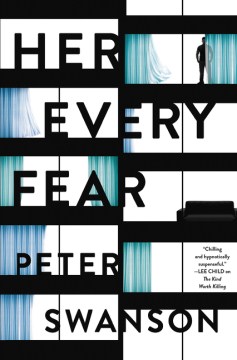 *Starred Review* London artist Kate Priddy agrees to a temporary apartment swap with her American cousin, hopeful that the move will push her past the crippling fears she's struggled against since she survived an attack by her stalking ex-boyfriend. Kate is certain she has the best of the deal; Corbin Dell's elegant Boston apartment is a far cry from her cramped London flat. But she barely unpacks before detectives arrive to question her about the murder of the woman living across the hall. Corbin claims that he barely knew Audrey Marshall, but Kate doubts his story when she finds Audrey's key hidden in his apartment. As Kate's suspicion mounts, her only friend in Boston, Alan Cherney, confesses that he watched obsessively from his apartment window as Corbin and Audrey developed a secret relationship. When Corbin goes missing in London, Kate becomes the prize in a cat-and-mouse game between killers. The skillfully conjured Boston winter creates the perfect atmosphere for breeding paranoia, which kicks into high gear with the introduction of Cherney's Rear Window–like flashbacks. Swanson established a reputation for complex psychological thrillers with his previous novels (The Kind Worth Killing, 2015, and The Girl with a Clock for a Heart, 2014), but here he introduces a delicious monster-under-the-bed creepiness to the expected top-notch characterization and steadily mounting anxiety. Copyright 2016 Booklist Reviews.

Unnerved after an ex-boyfriend kidnapped and nearly killed her, London art student Kate Priddy readily accepts Boston-based cousin Corbin Dell's proposal that they swap apartments for a while. Soon she's alarmed to learn that next-door neighbor Audrey was murdered and even more alarmed when charming Alan Cherney across the courtyard insists that Corbin was friendly with Audrey, which he denies. Swanson's The Girl with a Clock for a Heart and The Kind Worth Killing are both being made into films. With a 100,000-copy first printing.

When Londoner Kate Priddy reluctantly agrees to a six-month apartment swap with an American second cousin she's never met, she arrives in Boston overloaded with luggage—and more than her share of emotional baggage. She soon learns that her luxurious apartment building is the scene of a homicide and her anxiety accelerates as she regrets her bold transatlantic move. Kate's relentless sleuthing leads her to doubt her cousin Corbin's innocence when she makes a few questionable discoveries in his apartment. As Kate pushes herself to acclimate to her new American life, she uncovers more inconsistencies related to the homicide and further suspects Corbin and several other people in her new social circle. Is she simply an anxious woman with an overactive imagination, or is there something sinister lurking in her world? Psychological thriller devotees should block time to read Swanson's () novel in one sitting, preferably in the daylight. Readers can expect the hairs on their necks to stand straight up as they are consumed with a full-blown case of heebie-jeebies. [See Prepub Alert, 7/18/16.]

Kate Priddy, the heroine of this unconvincing psychological thriller from Swanson (The Kind Worth Killing), who's still traumatized by a boyfriend turned stalker, impulsively agrees to swap her London flat with Corbin Dell, an American cousin she has never met. After a harrowing plane trip and a ride through Boston's Sumner Tunnel that prompts a panic attack, Kate arrives at Corbin's luxurious Beacon Hill apartment just before the discovery of a murder in the apartment next door. The body of book editor Audrey Marshall is marked with gruesome postmortem cuts, which prove to be similar to those of other victims in places where Corbin has lived. Kate begins to suspect that her cousin knows more about Audrey's murder than he claims. As a fragile Kate tries to hold herself together, another stalker targets her. The characters, especially the female ones, rarely make rational decisions, and Kate herself doesn't consistently react in the face of grave danger in the manner of someone suffering from crippling anxiety. Swanson fans will hope for a return to form next time. Agent: Nat Sobel, Sobel Weber Associates. (Jan.) Copyright 2016 Publisher Weekly.

The woman in the windowFinn, A. J.

You can trust meMcKenzie, Sophie

In a dark, dark woodWare, Ruth