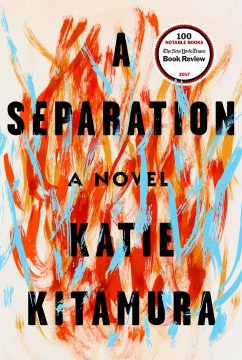 An unnamed narrator, a translator living in England, is relatively unbothered by her estrangement from her husband, Christopher, until she receives a worried call from his mother, Isabella. Unaware of the separation (Christopher wanted it to remain a secret), Isabella insists that her daughter-in-law go to him in Greece. The narrator didn't know he was there, though this isn't out of the ordinary for privileged, charming Christopher, a writer—and philanderer—but she agrees to go, and secretly, finally requests their inevitable divorce. However, when she reaches remote Gerolimenas, he's not there. She's calm, sure he's off doing research for his book on mourning rituals, seeking the women hired to wail at strangers' funerals that the region is known for. A midway reveal changes everything, though, and, with very little evidence and few clues, the narrator must interpret her husband's situation, sieving for readers the many layers of the story and its telling. At once cool and burning, Kitamura's (The Longshot, 2009) immersive, probing psychological tale benefits from its narrator's precise observations and nimble use of language. Copyright 2016 Booklist Reviews.

Kitamura, whose Gone to the Forest and The Longshot were finalists for the New York Public Library's Young Lions Fiction Award, turns in a mindbender about a woman whose husband vanishes in the Peloponnese shortly after they separate.. Copyright 2016 Library Journal.

Although separated from philandering husband Christopher for six months, a London woman agrees to continue to postpone "the process…of telling people." Almost a month has passed since she last talked to Christopher, rendering her unable to answer his mother Isabella's unexpected request for his whereabouts. She travels to Greece at Isabella's insistence, arriving at the hotel where her errant spouse has a room, only to learn he's traveling. Her wait for his return amid strangers who have known him more recently, more intimately, has shocking results. Between an anniversary-celebrating couple flaunting their passion to an elderly woman who is a rare professional funereal "weeper," the woman confronts the disintegration of love: "perhaps wife and husband and marriage itself are only words that conceal much more unstable realities, more turbulent than can be contained in a handful of syllables, or any amount of writing." VERDICT Like her two previous novels (The Longshot, Gone to the Forest), Kitamura's latest is another tautly austere, intensely internal narrative, both adroitly lyrical and jarring. For readers seeking profound examinations of challenging relationships—think Pamela Erens's Eleven Hours, Jung Yun's Shelter, Ha Jin's Waiting —Kitamura's oeuvre will be a compelling discovery. [See Prepub Alert, 8/8/16.]—Terry Hong, Smithsonian BookDragon, Washington, DC. Copyright 2016 Library Journal.

The unnamed narrator of Kitamura's third novel has been separated from her husband, Christopher, for six months when she travels from London to southern Greece to find him, prompted into action by Christopher's mother, who is unaware of the separation and worried because her son isn't returning phone calls. The narrator describes Athens traffic and the Peloponnesian coast, but it is her internal landscape—her imaginings, suspicions, speculations, thoughts, and feelings—that dominates the narrative. Habitually unfaithful Christopher has left his wife in the dark regarding much of his private life. She means to ask for a divorce, and then wavers. When she arrives at the hotel where he is registered, she delays calling his room. When Christopher fails to appear by checkout time, she takes no part in clearing out his things. When a pretty hotel receptionist turns out to be one of Christopher's lovers, the narrator buys her dinner. The narrator's deepest feeling comes not from learning the reason for Christopher's disappearance but from listening to a professional mourner's lament. Research into this mourning ritual had been Christopher's excuse for visiting Greece, although even his mother understood he also anticipated extra-marital indulgences. Kitamura suggests but never specifies the extent of these indulgences; likewise she leaves plot issues unresolved. Instead, she focuses on capturing a disarray of contradictory emotions, delineating the line between white lies and betrayal, legal and personal relationships, the impulse to hold on and the need to let go. Despite the mysterious premise, readers may find that the narrator's frequent contemplation frustratingly stalls the novel. (Feb.) Copyright 2016 Publisher Weekly.

Days in the history of silenceLindstrom, Merethe

Remind me again what happenedLuloff, Joanna, 1973-