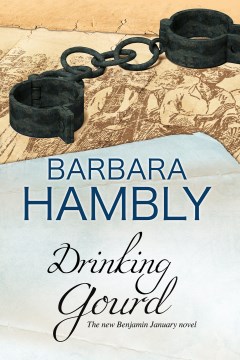 Benjamin January, the former slave who now solves mysteries when he's not playing piano for a living, doesn't have much time to find out who killed a Mississippi man who was part of the Underground Railroad. The chief suspect in the murder is the man responsible for the Railroad's entire Mississippi network; to defend himself, he'd have to reveal the truth about the Railroad, and that's something he's not prepared to do. So January must find the real killer before the network is exposed. Hambly treats the setting, the 1830s, with respect but not with excessive devotion. When the mood strikes, she can introduce modern touches, a line of dialogue here or a characterization there that feels right to us but might have felt a bit jarring to people in the nineteenth century. That's not a criticism, though purists might take it that way; rather, it's an acknowledgment that the author is aware that while her setting is historical, her readers are not. Another strong entry in an always enjoyable series. Copyright 2014 Booklist Reviews.

Benjamin January travels to Vicksburg, MS, to assist a wounded "conductor" on the Underground Railroad. When the conductor dies, Jubal Cain, who's responsible for coordinating safe houses for runaway slaves, is accused of the murder. It's up to Benjamin to find the real killer. Hambly's outstanding historical series continues with this 14th book (after Crimson Angel).

Hambly's outstanding 14th Benjamin January novel (after 2014's Crimson Angel), set in the summer of 1839, takes the free black physician from New Orleans to Vicksburg, Miss., whose swampy environs hide runaway slaves desperate to join the Underground Railroad and "follow the drinking gourd" north to freedom. When Ezekias Drummond, the principal conductor of the local railroad, is stabbed to death, the authorities arrest Jubal Cain, who coordinates the whole railroad operation in Mississippi, for the crime. January, who's been posing as a slave accompanying his white master, must identify Drummond's killer before Cain's role in the railroad is exposed. In addition to the slavery issue, Hambly focuses on broader social concerns. With panache and sensitivity, she explores the plight of women, both black and white, who can only endure abuses in such a society, and are rarely able to escape them as men sometimes can. Her well-tuned ear for the vernacular speech of her characters, whatever their race, is a plus. Agent: Frances Collin, Frances Collin Literary. (July)

The face of a strangerPerry, Anne