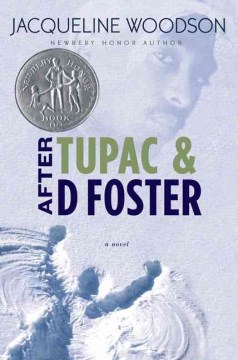 "The summer before D Foster's real mama came and took her away, Tupac wasn't dead yet." From this first line in her quiet, powerful novel, Woodson cycles backward through the events that lead to dual tragedies: a friend's departure and a hero's death. In a close-knit African American neighborhood in Queens, New York, the unnamed narrator lives across from her best friend, Neeka. Then D Foster wanders onto the block, and the three 11-year-old girls quickly become inseparable. Because readers know from the start where the plot is headed, the characters and the community form the focus here. A subplot about Neeka's older brother, a gay man serving prison time after being framed for a hate crime, sometimes threatens to overwhelm the girls' story. But Woodson balances the plotlines with subtle details, authentic language, and rich development. Beautifully capturing the girls' passage from childhood to adolescence, this is a memorable, affecting novel about the sustaining power of love and friendship and each girl's developing faith in her own "Big Purpose." Copyright 2008 Booklist Reviews.

Two black girls in Queens growing up as close as sisters find solidarity with another in Woodson's ruminative, bittersweet novel. The mothers of the unnamed narrator and her best friend Neeka don't allow them to leave their block; so when a girl who calls herself D shows up in the neighborhood one afternoon, telling them that her foster mother lets her "roam," they are immediately drawn to her freedom and mystique. It's 1994, a year dominated for the main characters by rap star Tupac Shakur's legal troubles and near-murder, and Woodson eloquently lays out what Tupac means to the trio and to their community: "You listen to Tupac's songs and you know he's singing about people like D, about all the kids whose mamas went away, about all the injustice...the hungry kids, sad kids, kids who got big dreams nobody's listening to." Although such injustice permeates the narrative, as exemplified by a subplot about Neeka's gay older brother, sent to prison for a crime he didn't commit, the primary tone here is one of fierce warmth and closeness. Copyright 2008 Horn Book Magazine Reviews.

As she did in Feathers with the poetry of Emily Dickinson, Woodson here invokes the music of the late rapper Tupac Shakur, whose songs address the inequalities confronting many African-Americans. In 1994, the anonymous narrator is 11, and Tupac has been shot. Everyone in her safe Queens neighborhood is listening to his music and talking about him, even though the world he sings about seems remote to her. Meanwhile D, a foster child, meets the narrator and her best friend, Neeka, while roaming around the city by herself ("She's like from another planet. The Planet of the Free," Neeka later remarks). They become close, calling themselves Three the Hard Way, and Tupac's music becomes a soundtrack for the two years they spend together. Early on, when Tupac sings, ''Brenda's Got a Baby,'' about a girl putting her baby in a trash can, D explains, ''He sings about the things that I'm living,'' and Neeka and the narrator become aware of all the ''stuff we ain't gonna know [about D],'' who never does tell them where she lives or who her mother is. The story ends in 1996 with Tupac's untimely death and the reappearance of D's mother, who takes D with her, out of roaming range. Woodson delicately unfolds issues about race and less obvious forms of oppression as the narrator becomes aware of them; occasionally, the plot feels manipulated toward that purpose. Even so, the subtlety and depth with which the author conveys the girls' relationships lend this novel exceptional vividness and staying power. Ages 12-up. (Jan.)

The revolution of Birdie RandolphColbert, Brandy