Things we lost in the fire : stories / Mariana Enriquez. 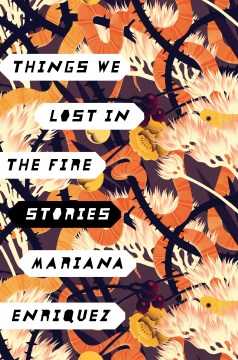 These stunning, incandescent stories by Argentine writer Enríquez are her first to be translated into English, and each one crackles with sophisticated weirdness, illuminating everyday activities against the underbelly of the macabre. "The Dirty Kid" presents an unnerving, sympathetic portrait of life on rough city streets, in which Enríquez renders graphic details with uncanny precision, luring readers into the brutal, repellent scene. "The Inn" deftly balances small-town rumor, budding sexuality, and inexplicable hauntings when two teenage girlfriends plan to prank a local innkeeper and witness the inexplicable. "Spiderweb" takes place in an equally eerie roadside motel on the Paraguayan border, where a truculent husband goes missing without a trace. Many of these stories flirt with the supernatural or suggest strange coincidences, but others embrace literary horror with cackling glee. "End of Term" takes up the familiar trope of a possessed child and makes it new with the concise, unsettling narration by a classmate who witnesses every step of the ensuing unraveling. Similar to Shirley Jackson and Jac Jemc, Enríquez is certain to dazzle and discomfit. Copyright 2017 Booklist Reviews.

This is the first taste English-language readers are getting of Argentine writer Enríquez's imaginative stories. Each piece contains an entire universe, with sparse, well-chosen details bringing to life the neighborhoods of Buenos Aires, the smaller Argentine towns, and the daily existence of characters. Some begin with characters' personal problems, such as "The Neighbor's Courtyard" and "Spiderwebs," before the paranormal appears (or seems to appear). Whether these apparitions are real or the manifestations of troubled minds is unclear. Other stories, such as "End of Term" and "Adela's House," are more classic ghost stories one could imagine whispered around the campfire (e.g., "She went through the door in the wall and was never heard from again!"). There are also stories in which groups practice barbaric rituals, including "The Dirty Kid" and "Under the Black Water." Fans of modern magical realism in the vein of Kelly Link will eat these tales up, although they may occasionally turn the stomach. Essential for readers of Roberto Bolaño, Paul Auster, or any literary fiction that tends toward the uncanny. [See Prepub Alert, 8/8/16.]—Kate Gray, Boston P.L., MA

Morbid tales of contemporary Argentina animate Enriquez's memorable collection of short fiction. In "The Dirty Kid," a privileged woman comes to believe that the homeless boy who lives outside her building has been the victim of a beheading, only to later learn that his fate is much more complicated. A young girl inexplicably disappears into an abandoned home, never to be seen again, in "Adela's House," while a broken-down car causes a tenuous marriage to disintegrate in "Spiderweb." At their best, stories such as "An Invocation of the Big-Eared Runt" recall Stephen King at his most literary, grounding supernatural horror allegories in a detailed realist tableau. But even the weaker sections convey the singular strangeness of life as a woman in Argentina, where instability seems to haunt every facet of existence—the electricity, the currency, the concept of family—and sudden, otherworldly violence is always at one's doorstep. Enriquez's debut collection is elevated by its vivid locale and its deft inclusion of genre sensibilities.

Her body and other parties: storiesMachado, Carmen Maria

Homesick for another world: storiesMoshfegh, Ottessa

Make something up: stories you can't unreadPalahniuk, Chuck

The houseguest and other storiesDavila, Amparo