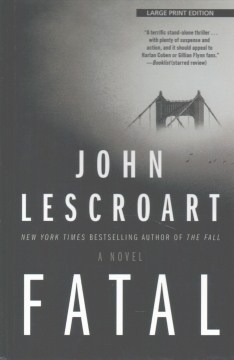 *Starred Review* Kate meets Peter at a dinner she attends with her husband and becomes intrigued with the charming, married man. She wants a little fling and sets out to seduce him. She succeeds, then ends things quickly, but she's awakened the beast in Peter. A few days later Kate is having lunch with her closest friend, Beth, a cop, and the women are caught up and severely injured in a terrorist attack in the busy San Francisco restaurant, which is near Peter's office. That event, coupled with his brief tryst with Kate, convinces Peter to leave his wife and family and follow through on all his sexual desires, even though Kate has rebuffed him. Months later, Kate and Beth are both recovering from their injuries when they hear that Peter has been murdered. Beth is assigned the case, and, while her partner cares for his sick child, she follows every lead, getting nowhere fast. These characters are well drawn, and Beth would make a great continuing character should Lescroart choose to rest his Dismas Hardy series. On its own, this is a terrific stand-alone thriller that melds police procedural with plenty of suspense and action, and it should appeal to Harlan Coben or Gillian Flynn fans.HIGH-DEMAND BACKSTORY: Lescroart by the numbers: 18 New York Times best-sellers; more than 12 million copies sold; translated into 22 languages in 75 countries. Copyright 2016 Booklist Reviews.

With his new stand-alone, Lescroart takes an infrequent step away from the lives of lawyer Dismas Hardy and his pal Abe Glitsky (last seen in ) to introduce Sgt. Beth Tully of the San Francisco homicide squad. Beth is a hardworking single mom whose longtime friend Kate Jameson initiates an affair with a married man named Peter Ash six months before he is murdered. Beth and partner Ike McCaffrey are assigned to investigate the killing, propelling Beth into the uncomfortable position of interrogating Kate in a manner that barely falls short of accusation and causes a painful rift between the friends. What follows is a complicated turn of events that brings about the deaths of two more victims before Beth and Ike are able to sort through their growing list of suspects. True to form, Lescroart handles his multiple story lines with aplomb, enticing readers to leave Dismas Hardy behind—for now. [See Prepub Alert, 7/18/16.]

A New York Times best-selling author of multiple series, with the Dismas Hardy series perhaps the best known, Lescroart here offers a stand-alone. When Kate attends a dinner party with devoted husband Ron, she meets Peter (there with his wife) and is wildly attracted to him. Her obsession leads to a burning one-night stand, after which Kate pulls back, sure she can get on with her life. But not so fast. A masked man shooting up the café where Kate sits with her best friend is only the first of several incidents indicating that Kate has made a grave mistake.

Bestseller Lescroart (The Fall and 18 other Ditmas Hardy novels) successfully blends a police procedural with a whodunit in this absorbing standalone. A few days after meeting at a dinner party in San Francisco, Kate Jameson, who's married, phones lawyer Peter Ash about a private legal matter and suggests they rendezvous at a downtown hotel, where she has a room. After they end up having sex, Kate doesn't want a repeat, but Peter becomes obsessed with her. Soon afterward, Kate and her best friend, Beth Tully, a San Francisco homicide inspector, survive a terrorist attack. Six months later, Beth and her partner, Ike McCaffrey, are called to a beach where Peter's body has washed up. The corpse, which was in the water for over a day, has a bullet hole in the chest, but the bullet is missing. With so little to work with and alibis abounding, Beth and Ike make slow progress. The challenges for the protagonists lend verisimilitude to the story and give it a satisfying rhythm. Lescroart keeps readers guessing until the very end. Agent: Barney Karpfinger, Karpfinger Agency. (Jan.) Copyright 2016 Publisher Weekly.

A stranger on the beachCampbell, Michele, 1962-