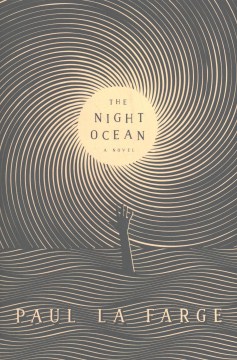 *Starred Review* H. P. Lovecraft has become a lightning rod of late for writers—Victor LaValle, Matt Ruff, Kij Johnson, Ruthanna Emrys, and Silvia Garcia-Moreno to name a few—who turn his fiction head over tentacles, using their own weird fiction to re-examine Lovecraft's racism, sexism, and homophobia. La Farge furthers this trend to great effect, blending weird fiction, literary fiction, mystery, and memoir into a strange cocktail. "The Night Ocean" was originally a short story, co-written by Lovecraft and young Robert Barlow in 1930s Florida. La Farge creates a fictional web from Barlow's life and other events like William S. Burroughs' time in Mexico, the McCarthy era, and the fan wars of early science-fiction writers. When Charlie Willett, fascinated by Lovecraft's legacy, digs up Barlow's diary of Lovecraft's Florida visit, which alleges a homosexual relationship, he becomes caught in the web. Every string he pulls creates further entanglements. Is the diary real? Did Barlow commit suicide in Mexico? One more dimension is added as Willett's psychotherapist wife, Marina, struggles to find out what happened to Charlie after he became lost in his obsession.La Farge's tale should enthrall readers who want to explore the human cost of false facts and personal deceptions, the nebulous borders of memoir and fiction, or the self-inflicted wounds of prejudice. It's a sudden fall down a bibliophile's rabbit hole of somewhat forgotten writers and a reminder that the real world can be just as weird as the Cthulhu mythos. Knowledge of Lovecraft or the book's other references will enhance a reader's experience but aren't required. Copyright 2017 Booklist Reviews.

In 1934, horror writer H.P. Lovecraft stays two months in Florida with a young fan named Robert H. Barlow. In this expansive tale, skillfully blending fact and fiction, the nature of their relationship becomes a subject of speculation after the discovery of an erotic diary that may or may not be Lovecraft's record of the visit. Only Barlow knows for sure, and the secret goes to the grave with him after his supposed suicide in 1951. Years later, writer Charlie Willett believes he has evidence Barlow is alive in Canada. He visits "Barlow," writing a book that reveals the truth about the diary. However, it's discovered that Charlie has been duped. With his reputation ruined, he also commits suicide. Four years later, his widow, Marina, a New York psychotherapist, meets with "Barlow," also known as L.C. Spinks, to learn the secret he revealed to Charlie on his last visit. It can be difficult to tell at times whose story this is, moving as it does from Lovecraft to Barlow to Charlie and finally to Marina. Yet, in the end, it's clear this is ultimately about stories; how we shape them, and their power to shape us in return. [See Prepub Alert, 9/12/16.]—Lawrence Rungren, Andover, MA

Reviewed by Peter Cannon Was H.P. Lovecraft, the great American horror writer, gay? That's the question at the start of this ingenious, provocative work of alternative history from La Farge (Luminous Airplanes). All the evidence, including Lovecraft's voluminous correspondence and the firsthand accounts of those who knew him (notably the woman to whom he was briefly married), indicates that he was not. In his letters, he called homosexuality a perversion, but then he dismissed human sexuality in general as a lower form of animal activity. But what if this was all a pose? Lovecraft, who lived most of his life in Providence, R.I., did spend the summer of 1934 visiting a teenage fan, Robert Barlow, at the Barlow family home in central Florida. Barlow, who would later become a professor of Mexican ethnography, committed suicide in Mexico City in 1951 to escape blackmailers who were threatening to expose him as a homosexual. In the present day of this novel, New York freelance writer Charlie Willett, an avid Lovecraft fan, manages to locate a copy of the Erotonomicon (a play on Lovecraft's fictional Necronomicon), which purports to be the erotic diary Lovecraft kept during his time in Florida. Coded prose using names from Lovecraft's invented mythology records his sexual exploits ("did Yogge-Sothothe in my room"). While retracing Lovecraft's steps in Florida, Charlie learns that Barlow may have faked his death and could still be alive. In the end, Charlie secures a substantial advance for a book about Lovecraft as a closet homosexual. Unfortunately for Charlie, he gets some critical facts wrong. He becomes a pariah and later disappears from a psychiatric hospital in the Berkshires, which is where the book's action begins. Lovecraft's novel The Case of Charles Dexter Ward likewise opens with the disappearance of a major character from a psychiatric hospital, a connection made explicit by La Farge naming the first five section titles after those in Ward ("A Result and a Prologue," etc.). The whole novel is framed as the account of the efforts of Charlie's devoted therapist wife to find her husband. Like Lovecraft's "The Call of Cthulhu," the novel consists of several sub-narratives, ranging widely in time and place. But instead of a revelation about humanity's diminished place in an impersonal universe, La Farge delivers insights into the human need to believe in stories and the nature of literary fame, while consistently upsetting readers' expectations. Other notable recent Lovecraft-related fiction includes Victor LaValle's The Ballad of Black Tom, a redo of Lovecraft's racist tale "The Horror at Red Hook," and Matt Ruff's Lovecraft Country, in which a black family contends with racism and supernatural forces in 1950s America. La Farge also touches on racial themes (Charlie's father is black, his mother white), but he outdoes his predecessors with this crafty mix of love, sex, and lies. (Mar.) Peter Cannon is a PW senior reviews editor and the author of The Lovecraft Chronicles, a novel. Copyright 2016 Publisher Weekly.