The journey / by Francesca Sanna. 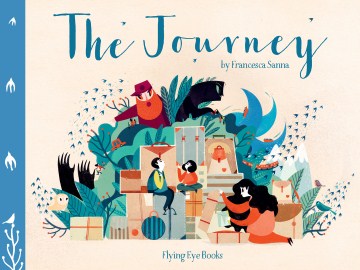 *Starred Review* Based on interviews she conducted with families at an Italian refugee center, Sanna's debut picture book uses powerful yet fanciful imagery to tell the story of one family's flight from danger in an unnamed country. In a bright palette and playful visual style belying the serious subject matter, the story begins on a beach, where the family of four happily plays. War comes in the form of a pitch-black wave attacking the shore, knocking down sand castles and causing havoc. That oppressive black wave continues inland, taking their father and following them home. The now-smaller family then sets off in a series of vehicles, headed for a land with high mountains and friendly creatures. The landscapes, animals, and people they meet on their journey begin to resemble fairy tales—a large bearded man angrily leans over a wall, practically swallowing it with his huge body, to turn them away from a border—which helps soften some of the inherent danger. The straightforward text from the children's perspective contrasts compellingly with images of the mother, who cries when they're not looking. By the end, the family has still not reached safety, and a train on the endpapers emphasizes that their journey is ongoing. Simultaneously heartbreaking, scary, and brightly hopeful, this timely tale with simply captivating artwork will spur little ones to ask questions that lack easy answers. Copyright 2016 Booklist Reviews.

In a piercing first-person account, a child tells of a harrowing journey with a sibling and their mother. Sanna's stylized illustrations are both captivating and unsettling; specifics of the setting are never established (details suggest an Islamic-world origin and a Nordic destination), and that intentional lack of specificity adds disquiet. Still, the story is not without hope. An author's note invites real-world connections. Copyright 2017 Horn Book Guide Reviews.

In a piercing first-person account, one of the two children in the family pictured here tells the story of losing their father to war and undertaking a harrowing journey with their mother as they hide in cargo trucks, evade guards, scale walls, and endure a sea passage on an overcrowded ferry. Sanna's stylized illustrations, with gargantuan villains and swirling inky black, are both captivating and unsettling. Specifics of the setting are never established. Details in the illustrations, such as headscarves and minarets, suggest an Islamic-world origin, while mountains and forest fauna (including a reindeer in a harness) a Nordic destination. That intentional lack of specificity adds disquiet to the journey, and Sanna amplifies the tension with occasional dissonance between the text and art; at one point we hear the narrator say, "But mother is with us and she is never scared," while the accompanying image shows her distraught and weeping. Still, the story is not without hope. The family's arrival is accompanied by an uplifting ascendance of birds and the promise of a new beginning. An author's note characterizes the arc as a "collage of personal stories" the author collected in a refugee center in Italy, inviting connections to the current state of the real world. thom barthelmess Copyright 2017 Horn Book Magazine Reviews.

Storybook imagery—foreboding woods, looming giants, and creatures of forest and sea—collides with desperately real circumstances as a family seeks haven from encroaching war. As Sanna's debut opens, a family of four builds a vast sand castle city at the beach as inky waters pour in ominously. Those waves transform into swiping, grabbing hands on the following page ("Every day bad things started happening around us"), and the children's father is soon killed. After the family decides to leave for a faraway country, Sanna traces their long journey, devoting attention to the children's reluctance to leave behind familiar surroundings and the sheer difficulty of their effort. "The further we go... the more we leave behind," she writes as the family switches from vehicle to vehicle, sometimes hiding beneath fruit or clay jugs. Sanna's crisp-edged, screenprintlike forms strike a careful balance between representing visceral dangers and offering tiny measures of hope. Given the ongoing refugee crisis in Europe and immigration debates in the U.S. and abroad, Sanna's story is well poised to spark necessary conversations about the costs of war. Ages 3–7. (Sept.)

Mama's nightingale: a story of immigration and separationDanticat, Edwidge, 1969-

The day you beginWoodson, Jacqueline