The way we lived then : recollections of a well-known name dropper / Dominick Dunne. 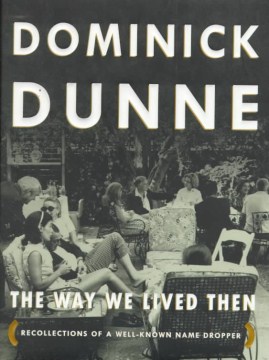 At first glance, novelist and Vanity Fair journalist Dunne's picture book looks like Hollywood fluff, but it is actually an urbanely confessional memoir. At nine years of age, Dunne was already so "starstruck" that when he visited L.A. for the first time he felt destined to live there. He held on to this dream all through a stint in the army and college, entering show business in New York as the stage manager for The Howdy Doody Show and then Robert Montgomery Presents, which provided his ticket west. He married the perfect wife and moved triumphantly to L.A. in 1957, determined not to merely work with the stars but to be part of the in-crowd. Dunne traces the impetus for what unfortunately became a "hectic and aggressive social quest" to a troubled relationship with his father and the shame of being looked down on as an Irish Catholic in his WASPy hometown of Hartford, Connecticut. At any rate, with neighbors like Peter Lawford and his wife, JFK's sister Pat, Jack Benny, and Roddy McDowall, the Dunnes were at the heart of 1960s Hollywood, and they made the most of it, attending and hosting a phenomenal number of parties. Dunne avidly photographed these now historic soirees, creating the scrapbooks he mined for this unique insider's volume. Here are snapshots of Merle Oberon, Billy Wilder, David Selznick, Natalie Wood, Angie Dickinson, Mia Farrow, and many more, but beneath all the glamour lay the seeds for Dunne's self-destruction, and he chronicles his dramatic fall from grace, and subsequent resurrection as a writer, with admirable candor. ((Reviewed September 1, 1999)) Copyright 2000 Booklist Reviews

Before becoming a bestselling novelist (The Two Mrs. Grenvilles) and Vanity Fair correspondent noted for skeptical dispatches from the O.J. Simpson and Menendez brothers murder trials, Dunne was a TV and movie producer in the 1960s. Less a memoir than a scrapbook, this slim volume consists largely of Dunne's often appealing celebrity snapshots. There's a young Warren Beatty at the piano, Elizabeth Taylor in white mink and a gimlet-eyed Princess Margaret, poised with a cigarette holder. The book's subtitle is well-taken. Plenty of names are dropped, though there's a paucity of fresh or compelling anecdotes. Dunne notes the "deep devotion" of Nancy and Ronald Reagan; in person, Elizabeth Taylor "is even more breathtaking than on the screen"; Natalie Wood, who "always looked like a million bucks," checks her makeup in the mirror-bright blade of a butter knife. There are exceptions to the pat anecdotes: a vicious Frank Sinatra, for instance, makes a memorable appearance. The book is further distinguished by the pages that focus on Dunne's own capitulation to drugs, alcohol and promiscuity; the irrevocable damage his tailspin wrought on his heroic wife (herself suffering from MS); and his slow but determined recovery. But it's odd that the Hollywood elite that betrayed Dunne at the nadir of his life should be so unreflectively celebrated here. (Oct.) Copyright 1999 Cahners Business Information.

My lunches with Orson: conversations between Henry Jaglom and Orson WellesJaglom, Henry, 1939-

Life isn't everything: Mike Nichols, as remembered by 103 of his closest friendsCarter, Ash, (Editor)

You must remember this: life and style in Hollywood's golden ageWagner, Robert, 1930-

The time of my lifeSwayze, Patrick