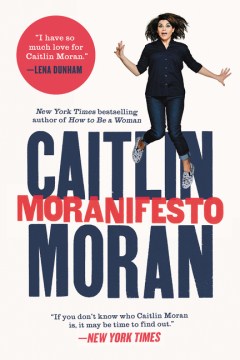 British writer Moran, author of the essay collection How to Be a Woman (2012), reached even larger American audiences with her stellar novel How to Build a Girl (2014). This collection of her London Times columns, newly compiled for U.S. fans, won't hold the same imminence as the columns did when they ran in England over the last few years, but no matter—seriously. With her exuberant vocabulary full of Briticisms, Moran's wise, bracing observations about politics, pop culture, feminism, and nearly everything else are no-holds-barred, and made easy and fun to digest by her crackling humor. Most undated columns run for three to four pages and are rather loosely organized into four sections, each one appearing after a new blurb from Moran that connects it to the previous piece. Once a homeschooled kid, Moran features libraries largely in her work. Bemoaning her young teen daughters' lack of interest in reading, she writes, "There's an air about someone who's gallivanted, joyously, through a library in their early years that I revere." Meet the original joyous library gallivanter herself; and stock up. Copyright 2016 Booklist Reviews.

In both her previous essay collections and her best-selling novel, , British humorist, writer, and feminist Moran has won audiences over with her sharp wit and penetrating insights about modern-day sexism. And while she continues this conversation, her newest collection, which compiles her most recent columns from UK newspaper , has more range as she examines the current state of Western culture and politics in general. Her message, or manifesto, persists in its tone of empowerment. She believes in her readers, and she believes that they, and not just the rich and connected, can and must be the catalysts of change. In this way, she brings to light how all political action, big or small, ultimately matters—an inspiring reminder, especially in today's uncertain political climate. It is difficult, and rare, to be both political and funny, critical yet inviting, but Moran handles this tension skillfully and she succeeds in at least compelling her readers to listen and read on, if not inspiring them into instant action.

Moran, a novelist and career pop culture critic, doesn't consider herself one of the "professional political people," but emboldened by the success of her 2011 book How to Be a Woman—a feminist manifesto, of sorts—she's taken on even more tough topics, including political ones, in this collection of her columns from the Times of London. The collection is organized loosely into themes such as "change" and "arguing on the Internet," with new introductions that tie everything together. Moran touches on a wide array of topics, including Daft Punk's hit song "Get Lucky," Hillary Clinton, social media, class differences, and abortion. Moran's endless sense of humor, enthusiasm for punching upward, and liberal use of the word you makes reading the collection like hanging out with a loud and chatty friend ("WHERE ARE THE SEXY BITS?" she demands of Tolstoy's War and Peace, in an essay on the importance of reading). Readers don't have to be interested in or knowledgeable about everything she references (such as U.K. politics) to have fun with Moran, but they do need a silly sense of humor. (Nov.)

The girl with the lower back tattooSchumer, Amy

See ya later: the world according to Arron CrascallCrascall, Arron

Why we suck: a feel good guide to staying fat, loud, lazy and stupidLeary, Denis

Don't get too comfortable: the indignities of coach class, the torments of low thread count, the never-ending quest for artisanal olive oil, and other first world problemsRakoff, David