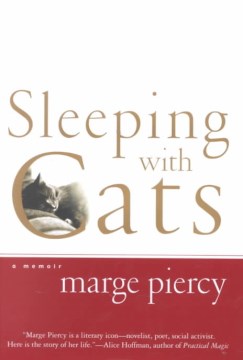 Esteemed novelist and poet Piercy loves cats, to the extent that "a spine of cats" has been the mainstay of her life. As she approaches her sixty-fifth birthday, she coaxes from her memory the "truth of events" as she can best interpret it from hindsight. Despite her insistence that her childhood is difficult to recall, the deprivations--even physical abuse--of those early years in Detroit are rendered in distinct hues. She joined a street gang specializing in petty theft; sexual adventure occupied not an inconsiderable amount of her teenage life. She attended college and endured two problematic marriages before she found her soulmate in her third husband. Through all the good times and bad times, Piercy has had cats to give her love and, figuratively, a shoulder to cry on. She mentions her writing, but more in passing, for this is primarily a memoir of family and friends--and cats have featured as both in her life. She is honest without having to spill blood and shed tears on every page. Although many of the events she shares are not unique, her resonant writing makes this a special book. ((Reviewed November 15, 2001)) Copyright 2001 Booklist Reviews

Prolific poet and novelist Piercy retells her life from the bottom up, starting in working-class Detroit. Copyright 2001 Cahners Business Information.

Piercy, the prolific author of more than 30 books of poetry, novels, essays, a play, and So You Want To Write: Mastering the Craft of Fiction and Personal Narrative (with Ira Wood, her third husband), writes an about-to-turn 65 memoir that, as she says, "focuses on my emotional life, not on my literary or political adventures, or most of my friendships." Her personal assessment is neither self-congratulatory nor self-denigrating: "I have become a better person in my most intimate relationships and in my relationships with the natural world and with my cats." But she finds herself less effective politically and also comments that "my life has been full of blunders, misprisions, accidents, losses, so no wonder I forget. If I did not forget much, how could I possibly continue?" Her narrative is indeed a penetrating analysis of emotional and personal difficulties and of some successes, and she articulates many of her most poignant moments not only in prose but also in verse. Recommended for a wide variety of general readers in public libraries. Carolyn M. Craft, Longwood Coll., Farmville, VA Copyright 2001 Cahners Business Information.

Born in the mid-1930s in a tough Detroit neighborhood, poet and novelist Piercy (Dance the Eagle to Sleep) fought grueling battles in her youth, involving difficult relationships with her parents, participation in a street gang and more. When she became pregnant at 17, her mother left her alone to perform an abortion on herself she almost bled to death and her hostile father once broke her fingers in the car door when she was late for a shopping trip. Piercy notes that her memoir's focus is her emotional life, but that understates the book's rich picture of her literary and political life. That life embraces 15 novels and just as many books of poetry, three marriages (one a 15-year open relationship in a communal household), sojourns in Chicago, San Francisco, Brooklyn and Paris, and a deep engagement in the political movements of the 1960s through the '80s. She peppers these events with charming vignettes of the many cats she's befriended during her life. Piercy is as convincing writing about her rough beginnings as she is describing her present status as the "cat lady" of her tiny Cape Cod town. "Remembering," she writes, "is like one of those old-fashioned black-and-white-tile floors: wherever I stand or sit, the tiles converge upon me. So our pasts always seem to lead us directly to our present choices. We turn and make a pattern of the chaos of our lives so that we belong exactly where we are." B&w photos. (Jan.) Copyright 2001 Cahners Business Information.