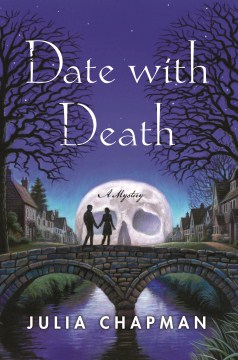 Delilah Metcalfe is struggling to make a go of the Dales Dating Agency (in the Yorkshire Dales village of Bruncliffe) when Samson O'Brien rolls back into town on his motorcycle after a 14-year absence, a disgraced undercover cop facing possible prosecution. To support himself, he opens the Dales Detective Agency, renting office space from Delilah, who, like the rest of the villagers, wants nothing to do with him. Still, she is desperate for the rent money. Samson is hired by a grieving mother to investigate the death of her son, who supposedly committed suicide. Soon Delilah learns two other men are dead, ruled accidents, and, to her growing horror, Delilah realizes that all three men were clients of her dating agency. Delilah hires Samson to find out the truth, and they set up Samson as bait for the murderer. A large cast of well-drawn, gossipy characters populate the lovingly described Bruncliffe. The smart, feisty Delilah and the arrogant Samson butt heads, with frequent verbal sparring, as they expose a murderer in this page-turning mystery. Copyright 2017 Booklist Reviews.

As the son of the local drunk, Samson O'Brien always felt like an outcast in his Yorkshire, England, village. No one knew why he left abruptly, but they haven't forgiven him for not returning for the funeral of his best friend, Ryan Metcalfe, who was killed in Afghanistan. Now Samson's home, setting up a private detective agency, and he's unprepared for the punch in the jaw from Delilah Metcalfe, Ryan's sister, when she learns that Samson is her new tenant. But as the owner of a struggling dating business, she is desperate for money and lets him stay. After the mother of an apparent suicide hires Samson to investigate her son's death, Samson discovers a link to Delilah's service, and the two team up to save the business and lives. What better way to do it than to use Samson as bait? The cozy-sounding title notwithstanding, this series launch by Chapman (a pen name for British author Julia Stagg) is an atmospheric traditional mystery with a vivid sense of place (there are light traces of Yorkshire dialect in the dialog) and spirited characters who drive the engaging plot. Recommended for Julia Spencer-Fleming fans or those who appreciate complex mysteries set in English villages.—LH

This series launch from Chapman, a pseudonym for Julia Stagg (the Fogas Chronicles), delivers an engaging twist on the lonely-hearts killer motif. Since her divorce, Delilah Metcalfe has struggled to keep her web design and online dating businesses afloat in rural Bruncliffe, Yorkshire. After she leases out an office space, she learns that her new tenant is Samson O'Brien, her deceased brother's best friend, who abruptly left Bruncliffe for London years ago. Despite animosity from Delilah and other locals, who view his sudden return with suspicion, Samson opens a detective agency, and his first client leads him to a series of seemingly accidental deaths connected to Delilah's speed-dating events. Gentle humor and an evocative sense of the Yorkshire Dales landscape compensate for an implausibly prolific killer with hackneyed motives. Chapman barely hints at the potential for romance between Samson and Delilah, and their developing friendship and suggestions of coming scandals in Bruncliffe should leave readers eager for the sequel.

Seances are for suckersBerry, Tamara

Folly: a British murder mystery set in the CotswoldsCameron, Stella

Murder at the millShaw, M. B.

Grace under pressureHyzy, Julie A.