Piecing me together / by Renee Watson. 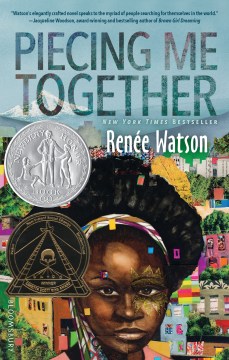 "Who owns the river and the line, and the hook, and the worm?" wonders Jade, a scholarship kid at Portland's prestigious St. Francis High. Through her first two years of school, she's had to balance her home life in a poor neighborhood with her life at a school populated mostly by rich white kids. When offered a mentorship for at-risk girls (which includes a full college scholarship), she jumps at the opportunity to learn how to be a successful black woman. However, she soon suspects that her mentor, Maxine, may only have a superficial understanding of Jade's challenges and that there may be things Jade can teach her. Watson is unafraid to show Jade as a young woman who is resilient and mature for her age, but also plagued by self-doubt. The book itself is a balancing act between class, race, and social dynamics, with Watson constantly undercutting stereotypes and showing no fear in portraying virtues along with vices. The book's defiance of a single-issue lens will surely inspire discussion and consideration. Copyright 2016 Booklist Reviews.

African American teen Jade doesn't particularly feel at-risk, but at her mother's prodding she takes every opportunity offered to her, including joining a mentoring group with a clueless, careless mentor. Watson takes Jade on her own journey of self-discovery, one that readers will eagerly follow. This involving, thought-provoking novel is a multifaceted and clear-eyed exploration of the intersections of race, class, and gender. Copyright 2017 Horn Book Guide Reviews.

At her mother's prodding, Jade has spent her high school career preparing herself for success. That has included taking every opportunity offered to her: a scholarship to the prestigious (and mostly white; Jade is African American) St. Francis High School. SAT prep classes. Essay-writing classes. While Jade has accepted every offer, she wonders who benefits more--she herself, or the people who get to boast that they've helped an "at-risk" girl from a "bad" neighborhood. While she does have financial and social issues to contend with at home, Jade is also fluent in Spanish and a talented artist; she doesn't particularly feel at-risk. When her guidance counselor suggests a "Woman to Woman" mentoring group, Jade is hopeful that her mentor will take the time to get to know her. But Maxine proves to be as clueless as the rest of them--when she even bothers to pay attention or show up. With no one willing to ask the questions to discover who she truly is, Jade realizes she will have to take the initiative and introduce herself to the world--and, in turn, create her own opportunities. Just as Jade is engrossed in her history-class study of York, the slave who accompanied Lewis and Clark, Watson (This Side of Home) takes Jade on her own journey of self-discovery, one that readers will avidly follow. With each chapter preceded by a Spanish word or phrase, this involving, thought-provoking novel is a multifaceted and clear-eyed exploration into the intersections of race, class, and gender. eboni njoku Copyright 2017 Horn Book Magazine Reviews.

Jade Butler, an African-American artist-in-the-making, lives with her mother in Portland, Ore., and travels by bus to private school, where she is both grateful for and resentful of the opportunities presented to her. In short, poetic chapters, Jade ponders her family, school, and neighborhood relationships, wondering where she fits in: "How I am someone's answered prayer but also someone's deferred dream." Watson (This Side of Home) weaves collage imagery throughout the story as Jade ruminates over historical figures such as York, the slave who traveled with Lewis and Clark, and distressing current events, including police violence against a neighborhood girl: "I am ripping and cutting. Gluing and pasting. Rearranging reality, redefining, covering, disguising. Tonight I am taking ugly and making beautiful." Jade's narrative voice offers compelling reflections on the complexities of race and gender, class and privilege, and fear and courage, while conveying the conflicted emotions of an ambitious, loyal girl. Teeming with compassion and insight, Watson's story trumpets the power of artistic expression to re-envision and change the world. Ages 12–up. Agent: Rosemary Stimola, Stimola Literary Studio. (Feb.) Copyright 2016 Publisher Weekly.