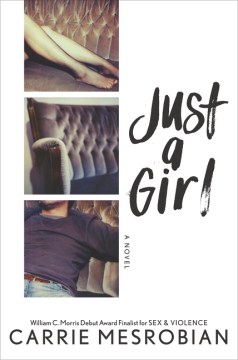 *Starred Review* Rianne's spent her whole life in Wereford, a small, nothing town in the Midwest, living with her divorced mom, getting up to mild trouble with her friends, casually sleeping around, and not trying terribly hard in school. By the time senior year rolls around, she still doesn't have any plans for her future, and she finds herself in a relationship with notorious playboy Luke Pinsky, who's kind of loyal and sweet, if oblivious to her needs. But when she meets Sergei, a 25-year-old Russian man who's studying agriculture at the community college, she's immediately entranced by his assured worldliness and, later, the confident way he touches her, which she keeps a secret from everyone, especially Luke. When she's faced with making a definitive choice about her future, can she decide between what she truly wants and what's been deemed "good"? Mesrobian is at her best plumbing the depths of what happens between big choices and elevating those potent moments of transition, and she does that beautifully here. Rianne's rich inner life, especially when it's at odds with what's expected of her, is captivatingly full of meaningful, compelling drama, and Mesrobian's frank, realistic depiction of teenage sexuality is a particular bright spot. There's nothing simple about being just a girl, and this resonant, thoughtful novel makes that abundantly, stunningly clear. Copyright 2016 Booklist Reviews.

High-school senior Rianne feels like she's gotten all she can out of her small Minnesota hometown--not to mention she's gained a reputation as "easy" there. But she doesn't see a clear alternative until meeting Russian college student Sergei. Mesrobian addresses sexual double standards and realistically examines the lives of working-class rural teens. However, despite its charged topics, the novel feels surprisingly emotionless. Copyright 2017 Horn Book Guide Reviews.

In small-town Wereford, Minn., high school senior Rianne has a reputation as an easy hookup: "She was Hat Trick Girl; she wasn't someone you took to prom." As graduation nears, Rianne finds herself with a steady boyfriend, a mother who has basically washed her hands of her, a father suddenly back in the picture, and no plans for what's next. As in her previous books, Mesrobian () writes meaningfully about teens who aren't bound for college and the complexity, intensity, and double standards of teenage sexuality. Rianne's infamous "hat trick" night mostly involved kissing. Her first sexual encounter, as a sophomore, was clearly rape—she was blitzed on pot, he was a college student—though she just thinks of it as regrettable. And most of the sex she's had hasn't been particularly satisfying. This depressing picture changes when she hooks up with Sergei, an attractive Russian in his 20s. Genuine sexual pleasure is a decided improvement, but as Rianne and Sergei grow closer, it feels less like she's making decisions for herself and more like she's still being defined by sex and men. Ages 14–up.

What happened to goodbyeDessen, Sarah

My life next doorFitzpatrick, Huntley

How to make a wishBlake, Ashley Herring