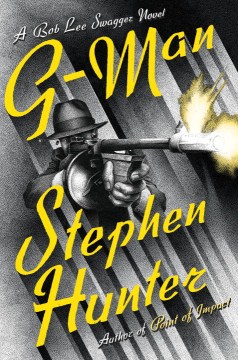 *Starred Review* Just as Hunter brilliantly used parallel narratives in The 47th Samurai (2007) to follow master Vietnam sniper Bob Lee Swagger's investigation into how a revered samurai sword came to be in his father Earl's possession, so in the latest Swagger novel, he employs another found artifact—a strongbox containing, among other things, a federal lawman's badge—to set Bob Lee on the trail of his long-dead grandfather Charles, about whom Bob Lee knows nothing. That federal badge leads Bob Lee to the revelation that Charles, in the thirties, had been a G-man in Chicago, engaged in the hunt for John Dillinger, Pretty Boy Floyd, and Baby Face Nelson, public enemies one through three. Jumping seamlessly between past and present, Hunter re-creates the fascinating Depression-era story of how bank robbers became populist heroes, offering in the process a truly compelling character in Charles, a man burdened not only by his inflexible sense of honor but also by a secret residing deep in his soul. And, of course, there's a modern story, too: Bob Lee is being tracked by a bizarre crew of crooks who know about the strongbox and think it's the key to a fortune. Lots going on here, but Hunter fits the parts as snugly as Bob Lee reassembling a rifle. Yes, we know Hunter writes gun violence as realistically and meticulously as anyone in the business, but what we forget is that he builds character with equal precision. This is an outstanding thriller on every level. Copyright 2017 Booklist Reviews.

In this latest in the best-selling series, Bob Lee Swagger has a secret family history to follow up after uncovering a box containing his never-mentioned grandfather's FBI badge, a .45 automatic, and a mysterious diagram.

At 71, Bob Lee Swagger no longer has the physical skills that made him a sniper and expert shooter, so he turns to investigating the mystery of his grandfather Charles's life. In tearing down the family home in Arkansas, Bob finds a lockbox containing a .45 pistol and a crude map. Much research and finally a hidden memoir reveal that Charles had played a brief but major role in the nascent FBI's 1934 pursuit of John Dillinger, Bonnie and Clyde, and especially the notorious killer, Baby Face Nelson. As in the earlier Sniper's Honor, Hunter alternates between 1934 and the present, carefully using historical events and people while inserting Charles, also a veteran sniper, to train the feds in the necessary shooting skills. The verisimilitude of his Thirties portrayal vividly shows the Depression-era appeal of bank robbers vs. the government. In this ninth entry in the "Bob Lee Swagger" series, Hunter displays his trademark skills in character development, a fascination with firearms, pulp fiction dialog, and an action-packed plot. Fans of Lee Child or Tom Clancy may join the many Swagger followers in enjoying this tale of violence and moral anxiety. [See Prepub Alert, 11/21/16.]—Roland Person, formerly with Southern Illinois Univ. Lib., Carbondale

Hunter's outstanding 10th Bob Lee Swagger novel (after 2014's ) takes readers back to the gangster days of the 1930s. In the present, Swagger investigates the murky past of his grandfather, Charles, a hard, taciturn man who spent most of his life as the sheriff of Polk County, Ark. Flashbacks reveal that Charles was also a skilled marksman who took a leading role in the Justice Department's 1934 manhunt for bank robbers John Dillinger, Pretty Boy Floyd, and, most importantly, the frighteningly violent Les Gillis (aka Baby Face Nelson). The problem for Swagger is the lack of any record of Charles ever working as a G-man, though there's ample rumor and hearsay that he was deeply immersed in the campaign to hunt down and kill the outlaws. Hunter's skilled ear for dialogue and idiom has never been better, and some of the action scenes—especially a chapter describing the famous robbery of the Merchants National Bank in South Bend, Ind., on June 30, 1934—are as elegant as they are disturbing. Eight-city author tour. Agent: Esther Newberg, ICM. (May)

The book of liesMeltzer, Brad