Wolf on a string : a novel / Benjamin Black. 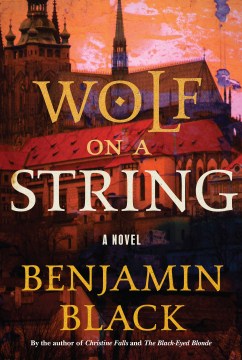 Rudolf II, Holy Roman Emperor in Prague, calls his courtiers his "wolves," but when he summons alchemist-scholar Christian Stern, a dissonant note (a "wolf tone") sounds in the court. Stern clearly misunderstands his meteoric rise to fame as the superstitious king's right-hand man and bounds clumsily into the royal presence with painfully amusing naïveté. The action begins with the murder of Rudolf's young mistress, whom Stern is the first to discover, and nearly grows into full-scale war as players are shuffled and replaced at the hands of invisible gamesmen, about whom Stern can only guess. Benjamin Black, a pseudonym for literary novelist John Banville, also writes the Quirke mysteries, set in modern-day Ireland. In this intricate, clever, and uncomfortable historical suspense novel, he drops a flawed hero into a seventeenth-century labyrinth without a torch. Unlike Stern, readers will suspect everyone and may squirm a bit as inevitable disaster approaches. Kenneth Wishnia's historical mystery The Fifth Servant (2010) is similarly suspenseful and full of atmospheric detail, while Sara Poole also creates a courtiers' web of deceit for a wilier outsider to navigate in her Poisoner series. Copyright 2017 Booklist Reviews.

John Banville writes impeccable literary works like the Man Booker Prize-winning The Sea, while as Benjamin Black he writes impeccable crime novels starring Dublin-based pathologist Quirke. Here he assumes his Black persona but travels back to 1599 Prague. Young Christian Stern, who arrives there with the winter snows to seek his fortune, finds a well-born woman with her throat cut in Golden Lane, next to the castle of the Holy Roman Emperor, Rudolf II. Soon, at the behest of Rudolf himself, our stalwart hero is investigating the murder, which leads him to intrigue surrounding the throne.

Black () displays his mastery of yet another mystery subgenre in this brooding, atmospheric whodunit set in 16th-century Prague. Christian Stern, the bastard son of the Prince-Bishop of Regensburg, has arrived in that city in the hopes of winning the favor of Rudolf II, the ruler of the Holy Roman Empire, and obtaining a place among the court's learned men, such as Johannes Kepler and Tycho Brahe. The first night he spends in Prague, Stern finds Magdalena Kroll—the teenage daughter of Dr. Ulrich Kroll, Rudolf's physician and "one of his chief wizards"—lying in a snowy street with her throat slit. Initially a suspect, Stern soon becomes the emperor's designated investigator. In order to discover the truth behind the murder, he must navigate a realm in which no one can be fully trusted. Superior prose (Magdalena's head rests in a pool of blood, a "black round in which the faint radiance of the heavens faintly glinted") complements the intricate plot. Black is the pen name of Man Booker Prize–winner John Banville. Agent: Ed Victor, Ed Victor Literary Agency (U.K.). (June)

The fifth servantWishnia, k. j. a.