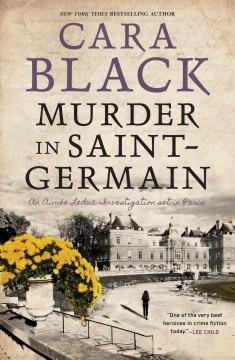 It will come as no surprise to readers of Black's Aimée Leduc series to learn that the Parisian PI is in way over her head this time. Her straightforward computer-security job at an art school just got complicated by the blackmailing of one of the professors; Aimée's friend Suzanne, of the Brigade Criminelle, has spotted a Serbian war criminal who was supposed to be dead and now she needs Aimée's help to track him down. And that's just the work stuff. There's also the matter of Beloit, Aimée's new boyfriend/babysitter, and the reappearance of her old beau, also the father of Aimée's child, Chloe. And let's not forget Aimée's godfather, Morbier, in the hospital and near death, asking to speak with his estranged goddaugher. Oh, and Aimée's pink scooter has been behaving poorly, making it all the harder to crash around town at the usual breakneck pace. It's a familiar setup, of course, but this is one series whose primary appeal is its absolute predictability. Keep crashing, Aimée, just like you always have. The view of Paris from the back of your scooter couldn't be better. Copyright 2017 Booklist Reviews.

Next in the New York Times best-selling series starring Aimée Leduc, this work picks up where the penultimate Murder on the Champ de Mars left off. It's 1999, and Aimée is approached by Brigade Criminelle agent Suzanne Lesage, whose team has been tracking war criminals in fracturing Yugoslavia. Suzanne believes that she's being stalked by a notorious Serbian warlord her team thought they had killed.

In her 17th outing, Parisian PI detective Aimée Leduc has two cases: a secretive job for a professor, and a dangerous investigation into the reappearance of a war criminal who should be dead. Could his return be linked to the murders of members of an elite counter-terrorism squad? At the same time, Leduc juggles caring for her baby between jobs. [See Prepub Alert, 1/4/17.]—LH

Set in the sizzling summer of 1999, Black's twisty 17th Aimée Leduc investigation (after 2016's finds the Parisian PI doing a job for the École des Beaux-Arts, the kind of computer security work that pays the bills for her agency, Leduc Detective. Then old acquaintance and counterterrorism operative Suzanne Lesage asks Aimée to find a Serbian warlord, who was presumed dead but who, Suzanne insists, is alive and following her. This case presents the kind of danger that Aimée hoped she left behind with the birth of her daughter, Chloé, eight months before, but she agrees to help. Meanwhile, she's wracked with guilt after a shooter seriously wounds her godfather, Morbier, and she doesn't completely trust Chloé's biological father, Malec, who has turned up, seeking to spend time with the baby. Black juggles numerous plot lines with panache and brings to life the charm and grit of Paris. A few nods to old-fashioned capers (Aimée keeps a whole wardrobe of disguises) enhance a mystery as sharp as Aimée's designer stiletto heels. Agent: Katherine Fausset, Curtis Brown. (June)