The hate u give / Angie Thomas. 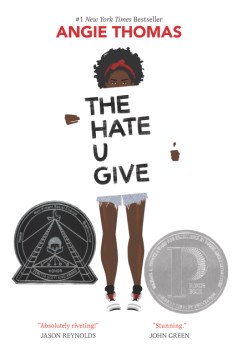 *Starred Review* Sixteen-year-old Starr lives in two very different worlds: one is her home in a poor black urban neighborhood; the other is the tony suburban prep school she attends and the white boy she dates there. Her bifurcated life changes dramatically when she is the only witness to the unprovoked police shooting of her unarmed friend Khalil and is challenged to speak out—though with trepidation—about the injustices being done in the event's wake. As the case becomes national news, violence erupts in her neighborhood, and Starr finds herself and her family caught in the middle. Difficulties are exacerbated by their encounters with the local drug lord for whom Khalil was dealing to earn money for his impoverished family. If there is to be hope for change, Starr comes to realize, it must be through the exercise of her voice, even if it puts her and her family in harm's way. Thomas' debut, both a searing indictment of injustice and a clear-eyed, dramatic examination of the complexities of race in America, invites deep thoughts about our social fabric, ethics, morality, and justice. Beautifully written in Starr's authentic first-person voice, this is a marvel of verisimilitude as it insightfully examines two worlds in collision. An inarguably important book that demands the widest possible readership. HIGH-DEMAND BACKSTORY: From the moment this book sold, it has been high-profile. An in-the-works movie adaptation will further push this to the head of the class. Copyright 2016 Booklist Reviews.

African American sixteen-year-old Starr Carter lives a life caught between her rough, predominantly black neighborhood and the "proper," predominantly white prep school she attends. This precarious balance is broken when Starr witnesses the shooting of her (unarmed) childhood friend Khalil by a police officer. Debut author Thomas is adept at capturing the voices of multiple characters in her powerful, in-your-face novel. Copyright 2017 Horn Book Guide Reviews.

Sixteen-year-old Starr Carter lives a life many African American teenagers can relate to: a life of double consciousness. Caught between her rough, predominantly black neighborhood and the "proper," predominantly white prep school she attends, Starr has learned how to "speak with two different voices and only say certain things around certain people." This precarious balance is broken when Starr witnesses the shooting of her (unarmed) childhood friend Khalil at the hands of a police officer. What follows is a gut-wrenching chain of events that alters all Starr holds dear. New relationships are forged, old ones are severed, and adversaries arise as Starr's family, friends, school, and neighborhood react to Khalil's death, including questioning who Khalil was, and whether his death was justified. Between her neighborhood's "no-snitching" code and inaccurate media portrayals, Starr must decide whether or not to speak out—and her decision could endanger her life. With a title taken from rapper Tupac Shakur's acronym THUG LIFE ("The Hate U Give Little Infants Fucks Everybody"), the novel introduces numerous components of the urban experience, "thug life" included. From drug addicts to police officers, most characters are multifaceted, proving that Starr's world is not all black or white (or black vs. white, for that matter). The story, with so many issues addressed, can feel overwhelming at times, but then again, so can the life of an African American teen. Debut author Thomas is adept at capturing the voices of multiple characters, and she ultimately succeeds in restoring Starr's true voice. Thomas has penned a powerful, in-your-face novel that will similarly galvanize fans of Kekla Magoon's How It Went Down (rev. 11/14) and Jason Reynolds and Brendan Kiely's All American Boys (rev. 11/15). eboni njoku Copyright 2017 Horn Book Magazine Reviews.

At home in a neighborhood riven with gang strife, Starr Carter, 16, is both the grocer's daughter and an outsider, because she attends private school many miles away. But at Williamson Prep, where she's among a handful of black students, she can't be herself either: no slang, no anger, no attitude. That version of herself—"Williamson Starr"—"doesn't give anyone a reason to call her ghetto." She's already wrestling with what Du Bois called "double consciousness" when she accepts a ride home from Khalil, a childhood friend, who is then pulled over and shot dead by a white cop. Starr's voice commands attention from page one, a conflicted but clear-eyed lens through which debut author Thomas examines Khalil's killing, casual racism at Williamson, and Starr's strained relationship with her white boyfriend. Though Thomas's story is heartbreakingly topical, its greatest strength is in its authentic depiction of a teenage girl, her loving family, and her attempts to reconcile what she knows to be true about their lives with the way those lives are depicted—and completely undervalued—by society at large. Ages 14–up. Agent: Brooks Sherman, Bent Agency. (Feb.) Copyright 2016 Publisher Weekly.