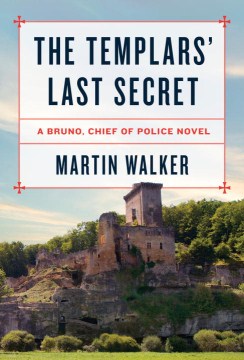 *Starred Review* Walker's Bruno, chief of police, mysteries are like the ideal European vacation: loaded with inspiring sights, good companions, and memorable meals (and there's murder, too!). Spend time with Bruno, his dog, horses, friends, and farmhouse in the tiny village of St. Denis in the Périgord region of rural France, and you feel as if your own life has been enhanced. The latest Bruno novel, the tenth in the series, serves up the usual heady flavors of mystery and setting but also explores the archaeology of the region, extending back to the famous Lascaux cave paintings. What drives the story into the past, including the history of the Knights Templar, is the discovery of the body of an archaeologist, a pregnant woman who either fell or was pushed from a wall of an ancient, ruined chateau. Bruno's investigation is aided and enlivened by the participation of a young Haitian magistrate from Paris. Together, they discover that the woman who died trying to scale the wall was probably murdered as she sought a religious artifact tied to the Middle East, the possession of which could have deadly repercussions. The latest Bruno features a complicated but enjoyable plot, a rich knowledge of archaeology, and the reliable pleasures of Bruno's region, including scenery, Bergerac wine, and knockout dining (Bruno himself will remind some readers of Robert B. Parker's Spenser, in his attentive cooking). Another feast for mystery and food lovers. Copyright 2017 Booklist Reviews.

In southwestern France, a woman's body is found at the foot of a cliff near the Château de Commarque; underneath the former Knights Templar stronghold lies a labyrinth of prehistoric caves. In his tenth outing (after Fatal Pursuit), St. Denis police chief Bruno, and young Amélie, who's shadowing Bruno's community policing, discover the dead woman is an archaeologist who was tracking a mysterious religious artifact that could aggravate tensions among Middle Eastern factions. When terrorists emerge to threaten the safety and sanctity of St. Denis, Bruno must join forces with both new and old friends to protect his community. Bruno and the idyllic town of St. Denis continue to gain popularity with readers, thanks to the combination of a likable character, a vivid sense of place, and detailed descriptions of France's Dordogne region. Fans of Louise Penny's "Armand Gamache" series and Fred Vargas's "Commissaire Adamsberg" mysteries will enjoy another view of policing in a French community.—ACT

In Walker's deftly plotted 10th mystery starring St. Denis, France, police chief Benoît "Bruno" Courrèges (after 2016's ), the small-town cop with a knack for stumbling onto big cases rolls into action when an unidentified woman takes a fatal fall from the ramparts of an ancient fortress, apparently before she could finish painting graffiti there that may relate to the medieval order of the Knights Templar. With a Ministry of Justice observer in tow, Bruno displays brisk competence and amiable perceptiveness as he investigates what becomes a murder case. Prehistoric cave art, Crusader tales, and modern Islamic terrorism all figure into the crime, with each getting expository treatment that can be a little labored, even when written crisply. Series fans will happily note Walker's customary appreciation for local wines, food, and culture, and his bemused explanations of French bureaucracy, though some readers may find the novel's climax, by the prehistoric painted caves of Lascaux, slightly rushed and overheated. Agent: Stephanie Cabot, Felicity Bryan Associates. (June)

She lies in waitLodge, Gytha