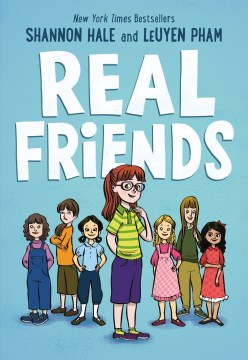 *Starred Review* At its best, friendship is breezy and affirming, but getting there isn't always so easy. Best-seller Hale knows this firsthand, and in this winsome graphic memoir, dynamically illustrated with Pham's lively artwork, she gives readers insight into her own, sometimes rocky relationships. From early on, young Shannon feels like the odd one out, so when she meets Adrienne in kindergarten, she latches on hard. As they grow older, Adrienne climbs to the top of the popularity heap, and while Shannon is usually included among the popular crowd, she feels more like a hanger-on. As the story progresses and Shannon's anxiety becomes more evident, each chapter focuses on a pivotal relationship and movingly demonstrates the shifting loyalties, petty jealousies, and tiny moments of short-lived triumph common to childhood friendships. Not even Shannon is without fault. Her own tunnel vision occasionally leads her to treat others regrettably, too. Pham's brightly colored panels are the perfect complement to Hale's nuanced story, particularly when she zooms in on reactions, subtle gestures, and facial expressions that add captivating emotional depth. Through the years of bristly bullying, though, Shannon finally finds real friends and gains a better appreciation for her own strengths, such as her imaginative creativity, which Pham illustrates in vivid, comically over-the-top flights of fancy. A wistful, affecting, and utterly charming exploration of the realities of childhood friendship. Copyright 2017 Booklist Reviews.

Hale recounts her elementary-school years in this graphic memoir. Readers will empathize with Shannon's experiences of being left out, teased, and bullied, and they'll feel relieved once she learns how to find real friends and avoid toxic ones. Illustrator Pham's often humorous yet always sensitive depictions of the characters' emotions make the book even more affecting. Hand to fans of Raina Telgemeier and Cece Bell. Copyright 2017 Horn Book Guide Reviews.

Author Hale recounts her elementary-school years in this graphic memoir that focuses on childhood friendship. Young Shannon feels a bit lost within her family, the middle child between two older and two younger close-in-age siblings, and at school it's a similar situation with her never quite fitting in anywhere. The book is divided into sections titled with the name of a friend or frenemy: Adrienne (her first friend), Jen (popular leader of "the group"), Jenny (mean-girl member of "the group"), Zara and Veronica (older girls who show Shannon that being yourself is the key to popularity), and Wendy (her oldest sister, whom she imagines as an angry bear). Readers will empathize with Shannon's painful experiences of being left out, teased, and bullied (mainly by troubled Wendy) and will feel relieved once Shannon eventually learns how to find real friends and avoid toxic ones. In her author's note at the back, Hale describes the book as her own, possibly flawed, memories of what happened; she also notes that today there are better resources for children with the (undiagnosed) anxiety and mild OCD she exhibited as a kid. Illustrator Pham's often humorous yet always sensitive depictions of the young characters' wide-ranging emotions make this memoir even more affecting, as do her perfectly adept renderings of the imaginative play and stories future writer Hale enjoyed creating. Hand this book to fans of Raina Telgemeier's and Cece Bell's graphic memoirs. jennifer m. brabander Copyright 2017 Horn Book Magazine Reviews.

Hale's childhood struggles with friends and family come to achingly poignant life in this candid graphic memoir. Over five chapters, readers follow a bookish and shy Hale from her earliest days in school through fifth grade, as she zealously guards her first friendship ("One good friend. My mom says that's all anyone really needs"), negotiates forever-changing friendship politics, and tries to stay on the good side of her turbulent oldest sister. Hale makes her own flaws evident, and that fairness extends to the bullies in her life, who lash out brutally at times, but whose insecurities and sadness are just as clear. The carefully honed narration and dialogue give Pham plenty of room to work. Her digitally colored ink cartooning pulls substantial emotion out of everyday moments (such as Hale retreating to a playground shrub to cry, only to find another girl already there, doing the same) and the imagination-fueled games Hale was forever devising, presaging her writing career. It's a wonderfully observed portrait of finding one's place in your world. Ages 8–12. Author's agent: Barry Goldblatt, Barry Goldblatt Literary. Illustrator's agent: Linda Pratt, Wernick & Pratt. (May)