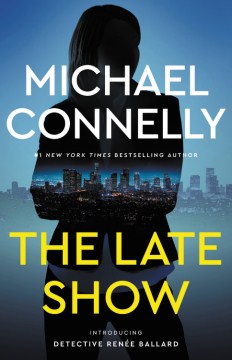 *Starred Review* Connelly has been doing much more with his female characters lately: in The Burning Room (2014), his longtime series lead, Harry Bosch, shared screen time with rookie detective Lucia Soto, who emerged as a fully fleshed out, multidimensional character, and in The Wrong Side of Goodbye (2016), Bosch is paired with Bella Lourdes, another young detective who profits from Harry's mentoring while showing she's more than capable of stealing a scene from the veteran. Now, perhaps inevitably, Connelly goes a step further: debuting a new series starring a female detective, Renée Ballard, who has been exiled to the night shift after unsuccessfully challenging the LAPD's old-boy network by bringing sexual-harassment charges against her boss. Chafing at the lot of the "late show" detective, who must launch investigations only to turn them over to the day shift when morning comes, Renée continues to investigate, off the books, two crimes that land on her plate: the beating of a prostitute and the murder of a cocktail waitress. Connelly's special genius has always been his ability to build character like the most literary of novelists while attending to the procedural details of a police investigation with all the focus of anEd McBain. He does both here, showing us Renée on her surfboard, working out her Bosch-like demons, but also grinding through the minutiae of the case until she achieves that "Holy Grail of detective work," that moment of knowing she has her man. Many established crime writers—James Lee Burke, Ian Rankin, Randy Wayne White—have launched new series as their signature heroes age, but few have done it as successfully as Connelly. HIGH-DEMAND BACKSTORY: The success of Amazon's Bosch TV show has enlarged Connelly's already enormous fan base, making this the perfect moment to launch a new print series. Copyright 2017 Booklist Reviews.

Talking to the deadBingham, Harry, 1967-