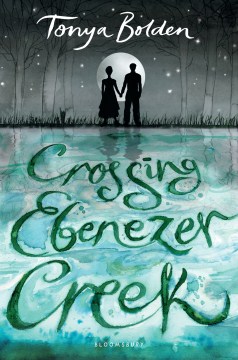 *Starred Review* Award-winning Bolden's latest takes readers back to 1864, the waning days of the Civil War. In rural Georgia, recently emancipated Mariah hides in the root cellar when Sherman's troops sweep into town. Joining the march, she meets Caleb, a young black man whose manner of dress and comfort with the white Union soldiers raises an eyebrow among Mariah and other formerly enslaved people. As they march toward Ebenezer Creek, Caleb develops feelings for Mariah, while she struggles to believe in her newfound freedom and plan for a future for herself and her younger brother, Zeke. Caleb and Mariah both harbor secrets and pasts that shape their worldviews, but they're starting to warm to each other when the unthinkable happens. Chapters alternating between Mariah's and Caleb's points-of-view lay bare the differences between the experiences of a free black man and those of an enslaved woman. Caleb's journal entries, for instance, signal a desire to publish or own a newspaper, while enraged Mariah laments, "colored lives don't matter." With keen insight, Bolden mines a lesser-known historical event and brings the human cost vividly to life. In particular, the moment when the freed men and women are abandoned by the creek as Confederate forces descend will surprise and horrify many readers. Bolden's trenchant, powerful novel is a strong testament to the many lost lives that certainly did—and still do—matter. Grades 8-11. Copyright 2018 Booklist Reviews.

In fall 1864, Mariah is liberated from slavery along with her little brother and joins Sherman's March to the Sea. She wants nothing more than an acre of her own ground--until she meets Caleb. Alternating between Mariah's and Caleb's perspectives, Bolden fleshes out a harrowing historical betrayal, weaving an unforgettable story. An author's note tells more about the drownings and massacre at Ebenezer Creek. Bib. Copyright 2017 Horn Book Guide Reviews.

In late fall of 1864, Sherman's March to the Sea is underway, and while the Union army wreaks havoc throughout the South and stamps out Confederate defenses to win the war, thousands of enslaved black people find themselves suddenly, disorientingly, freed by the army as well. Mariah, a young black woman in Georgia, can scarcely believe that her dream has come true when she is liberated along with her little brother Zeke and joins the march as it heads toward Savannah. She wants nothing more than an acre of her own ground, with the memories of death and cruelty behind her—nothing more, that is, until she meets the kind but inscrutable Caleb, who helps her and her friends adjust to life amidst the army. Caleb returns Mariah's feelings and relishes planning a bright future with her and Zeke, but he is also wary, aware that tensions are rising as the march continues, as the previously enslaved confront despised black slave drivers, and as Union soldiers begin to see the black civilians as a burden. Mariah and Caleb's relationship develops a little quickly for two such cautious and responsibility-laden young adults, but their shared trauma and fragile hopes are breathtaking in their authenticity as tragedy inevitably engulfs them. Alternating between Mariah and Caleb's perspectives, Bolden fleshes out a small, harrowing historical betrayal, weaving an unforgettable story and capturing both the frailty and resilience of hope. An author's note tells more about the December 1864 drownings and massacre at Ebenezer Creek; a list of sources is also appended. anastasia m. collins Copyright 2017 Horn Book Magazine Reviews.

Since the start of the Civil War, Mariah has dreamed of a Yankee victory that will grant her and her fellow enslaved men, women, and children their freedom. After Union soldiers show up to loot her Georgia plantation in November 1864, she, her younger brother Zeke, and many others join the 14th Army Corps of the left wing of General Sherman's army as it marches through Georgia. When a kind black man named Caleb invites her and Zeke to ride in his wagon, Mariah—generous hearted herself—accepts, bringing along a traumatized woman who cannot care for herself. The attraction between Caleb and Mariah is allowed to grow slowly and quietly, expressed only in each one's thoughts, over 12 days on the march. Readers learn, along with Mariah, about the war through Caleb's stories; the close-knit ties among the formerly enslaved members of the company are depicted through their experiences on the march, while the trials of their daily lives are revealed through Mariah's mostly silent memories. Bolden () bravely concludes this concise, moving story with a historically accurate and horrifying ending. Ages 13–up.

Salt to the seaSepetys, Ruta

Numbering all the bonesRinaldi, Ann

How I found the StrongMcMullan, Margaret

Promises to the deadHahn, Mary Downing

The door at the crossroadsElliott, Zetta

Letters from a slave girl: the story of Harriet JacobsLyons, Mary E.