Beyond the bright sea / Lauren Wolk. 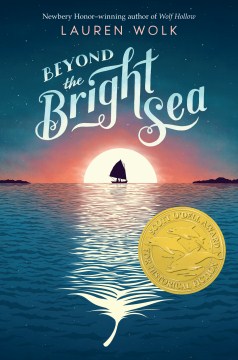 *Starred Review* Crow was a mere baby when she drifted to the shore of one of the Elizabeth Islands off the coast of Massachusetts in the first quarter of the twentieth century. She has since grown up with the painter Osh as her stand-in father; their only other friend is Maggie, who teaches Crow. Nearby Penikese Island was home to a leper colony at the time of Crow's birth, and most of the island folk assume her birth parents were lepers and shun her. Now a 12-year-old and uncertain of her parentage, Crow becomes increasingly curious following a fire on the now supposedly vacant Penikese. Where did she really come from? What happened to her parents, and is there a chance she has any surviving blood relatives? Crow's quest for answers as she grapples with her uncertain identity shapes the 2017 Newbery Honor Book author's sophomore novel. While this quiet, affecting story lacks the palpable sense of dread and superb pacing that made Wolf Hollow (2016) so impossible to put down, there's still plenty to admire in this more classic-feeling historical novel, which calls to mind Natalie Babbitt's The Eyes of the Amaryllis (1977). Wolk has a keen sense for the seaside landscape, skillfully mining the terror the ocean can unleash as a furious nor'easter heightens tension in the novel's climax. Historical fiction fans awaiting her follow-up will be pleased. Copyright 2017 Booklist Reviews.

Crow washed ashore on a tiny Massachusetts island as a baby. A fire on another uninhabited island that once housed a leper colony raises her curiosity about her origins, which leads to fearful danger. An exceptional mix of historical fiction, physical adventure, and interiority; suspense, insight, and the natural world play equal parts. An author's note provides historical background. Copyright 2017 Horn Book Guide Reviews.

Crow lives on a tiny island in the Elizabeth Islands off Cape Cod with her adoptive father, Osh. He and Miss Maggie, who lives on nearby Cuttyhunk, are her only companions, as other locals shun her. But Crow wasn't born on Osh's island; she washed ashore there twelve years earlier in 1913, a newborn baby alone in a skiff. She has always wondered about her origins, but not until she sees a fire ablaze on Penikese, an uninhabited island that once housed a leper colony, does an overwhelming "tide of curiosity" about her origins rise within her. Who were her birth parents? Why did they send her away? Were they lepers? What did they name her? She doesn't expect her questions to lead her and those she loves into the fearful danger that ensues. Wolk writes of her characters with the same precise, poetic nuance with which she describes Crow's beloved island and "the lyrics of the sea." Here, place forms character, just as human relationships do, and while Crow's adventures are a dramatic mix of buried treasure, deadly storms, and murderous pursuit, the heart of this story is the precisely observed, quietly realized evocation of clamming and lobstering and gardening; of the love and self-knowledge that come through mutual care. This is an exceptional mix of historical fiction, physical adventure, and interiority, a novel in which suspense, insight, and the natural world play equal, vital parts. An author's note provides more information about the history of these Massachusetts islands and the 1905-1921 Penikese leper hospital. deirdre f. baker Copyright 2017 Horn Book Magazine Reviews.

Creating mystery and suspense in an unusual setting, Newbery Honor–winner Wolk () spins an intriguing tale of an orphan determined to find her roots, set in the 1920s. As a baby, Crow was found in a boat washed up on a (fictional) Massachusetts island. Osh, the introverted painter who found her, named her and took her in. Since then, Crow has enjoyed a tranquil existence, except for being ostracized by those who believe she came from nearby Penikese Island, which housed lepers. When Crow, now 12, spots a fire across the water on Penikese, her curiosity is awakened. After persuading Osh and their friend Miss Maggie to investigate, she takes the first step in an emotional quest to discover who her parents were. Crow is a determined and dynamic heroine with a strong intuition, who pieces together the puzzle of her past while making profound realizations about the definition of family. Wolk's economical prose clearly delineates Crow's conflicting emotions and growing awareness, and readers will feel the love and loyalty that she, Osh, and Miss Maggie share. Ages 10–up.

The secret hum of a daisyHolczer, Tracy

The same stuff as starsPaterson, Katherine

Hour of the beesEagar, Lindsay