Anything is possible / Elizabeth Strout. 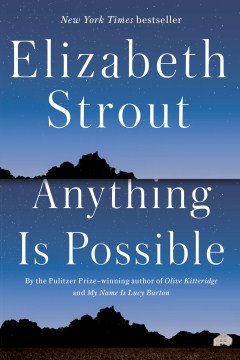 *Starred Review* In this collection of short stories centered in and near the fictional town of Amgash, Illinois, last visited in My Name Is Lucy Barton (2016), Strout once again shows her talent for adroitly uncovering what makes ordinary people tick. Here, for the most part, it's sex. Nearly every story has sex at its core—not erotic or salacious sex, but the sex that beats in our hearts, the mundane stuff that brought every last one of us into being. It's almost misleading to classify these as short stories; while they read fine as stand-alones, they work best as chapters that make up a novel of Amgash. Each story feeds off a previous one, whether via shared characters or mention of a prior incident. For example, Lucy's former classmate Patty not only gets her own story, she's also featured prominently in several stories and is mentioned in passing in others. Most of the stories feature Lucy herself—on the periphery, at least—whether it's a character reading Lucy's latest book or seeing her on a TV spot or stopping on a memory of the dirt-poor Barton clan. Clearly, this is a must-read for fans of Lucy Barton, but it's also an excellent introduction to Strout's marvelously smart character studies. Copyright 2017 Booklist Reviews.

The best-selling and Pulitzer Prize-winning Strout pleases fans of her No. 1 LibraryReads pick, , by expanding its many characters' stories.

In Strout's previous best seller, My Name Is Lucy Barton, the main character eventually escapes her life of fear and poverty by leaving town. This title follows some of the people who continue to live in the town Lucy fled, which has more than its share of poverty, domestic unhappiness, violence, and abuse. Those who were left behind continue on in their daily struggles, some faring better than others. Each chapter provides a brief look at one or two of those individuals, building a web of relationships and connections among the community and, tangentially, Lucy. The school janitor, the high school guidance counselor, Lucy's brother and sister, and several others provide insights into the different interpretations of events, showing the range of human response that is possible in the face of challenges. With her latest work, Pulitzer Prize winner Strout (for Olive Kitteridge) crafts a deep and complex inside view of the hearts and minds of individuals who make up a community. [See Prepub Alert, 11/21/16.]—Joanna Burkhardt, Univ. of Rhode Island Libs., Providence

In her latest work, Strout achieves new levels of masterful storytelling. Damaged lives can be redeemed but, as she eloquently demonstrates in this powerful, sometimes shocking, often emotionally wrenching novel, the emotional scars can last forever. If some readers felt that Strout's previous novel, , was too subtle and oblique about Lucy's hellish childhood, here Strout reveals specific details of the horrible circumstances in which Lucy and her siblings were raised, as recollected by some of the inhabitants of Amgash, Ill., and the surrounding communities. Using the novel-in-stories format of , Strout again proves Tolstoy's observation that each family is unhappy in its own way. Except for one episode in which Lucy herself comes back for a tortured sibling reunion, she is the absent but omnipresent thread that weaves among the dozen or so characters who are have suffered secret misery and are longing for love and understanding. Some are lucky: one of the five Mumford sisters reunites with her runaway mother in Italy; another, an angry young girl, is suddenly able to see the way to a brighter future. Others, including a Vietnam veteran with PTSD and a rich woman who is complicit in her husband's depraved behavior survive despite the baggage of tortured memories. "They had grown up on shame; it was the nutrient of their soil," one character acknowledges. Strout's prose is pared down, yet rich with implication. It is left for the character in the final episode, Lucy's cousin Abel, who despite a similarly deprived childhood is now a happy and successful business executive, husband, father, and grandfather, to observe, in what may be his final moments, that "Anything was possible for anyone."

Our souls at nightHaruf, Kent

The owl that carries us away: storiesRamspeck, Doug, 1953-