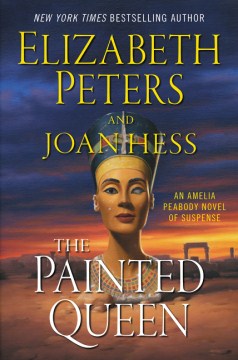 Loyal fans of the Amelia Peabody mysteries will welcome this final episode, accurately reported by Peters' friend and fellow mystery writer Hess. The death of Peters (pen name of Barbara Mertz) in 2013 signaled the end of the much-loved 20-book series. Hess has done an excellent job of carrying the narrative forward in Peters' fast-paced, entertaining style, portraying the series' palpable sense of adventure and the affection and witty repartee between Egyptologist Peabody and her husband, Radcliffe Emerson. The Emersons are back in Amarna, Egypt, for the 1912–13 excavation season, where the famous bust of Nefertiti has been discovered by Ludwig Borchardt. Problems occur when the bust disappears, then reappears in duplicate. Amelia and Emerson are so distracted by the implications of this event that a gang of monocle-sporting killers seems a minor inconvenience. Everyone in the familiar Peabody-Emerson cast is present or accounted for, tying up loose ends with panache and optimism. Series devotees may choose to branch out with the exploits of Tasha Alexander's similarly clever Lady Emily Ashton. Copyright 2017 Booklist Reviews.

When she died in 2013, the multi-award-winning Peters left much of the manuscript plus extensive notes for this 20th entry in the series starring Amelia Peabody and her archaeologist husband. Writing buddy Hess agreed to complete the story, which has the protagonists chasing after a stolen bust of Queen Nefertiti as Amelia dodges assassins.

Mystery surrounds the legendary Egyptian queen Nefertiti bust discovered in 1912 by German archaeologist Ludwig Borchardt. While the world may never know how the artifact ended up in Germany, we now understand the roles the great archaeologist Radcliffe Emerson and his equally eminent wife, Amelia Peabody, had in its discovery. Following the events detailed in The Falcon at the Portal, Amelia and her family are gearing up for another excavation season. No sooner do they check in to their Cairo hotel than a man tries to kill Amelia. While accustomed to danger, she and her husband must determine who is trying to get rid of them this time. After their son Ramses reports that someone tried to kill him, their adopted daughter Nefret figures out that the family of her former husband, Geoffrey Godwin, are seeking revenge for his death. When legendary author Peters died in 2013, she left behind a partially finished manuscript for this book. Her friend and fellow mystery writer Hess agreed to finish the story. Hess tries too hard to emulate Peter's style and, at times, the writing veers toward parody. Despite a few flaws, devoted Amelia Peabody fans (this reviewer counts herself as one) will read this book with tears in their eyes as they bid farewell to these much-loved characters (and author). [See Prepub Alert, 1/30/17.]—Lynnanne Pearson, Skokie P.L., IL

The long-running series by MWA Grand Master Peters (1927–2013) featuring forthright Amelia Peabody Emerson and her irascible archeologist husband, Radcliffe Emerson, comes full circle with this energetic final novel completed by Hess, Peters's friend and fellow mystery author. In 1912, the Emersons revisit Amarna, the setting of the first Peabody book, 1975's ; Egypt's Service des Antiquités director Maspero is worried about the disappearance of German archeologist Morgenstern from the excavation there. Peabody soon locates Morgenstern in Cairo, but his erratic behavior and ties to forgers of a priceless likeness of famed queen Nefertiti disturb her. Efforts to locate the original artifact are complicated by attempts on Peabody's life by men wearing monocles, an interlude with a melodramatic romance novelist, and the reappearances of the Emerson family's nemesis, Sethos. Although fans may be a bit disappointed by some unresolved questions (such as Peters's hints of a connection between the Peabody and Vicky Bliss series), the Emerson clan takes a fitting final bow as the curtain falls on a pioneering career.

Death at Bishop's KeepPaige, Robin, (Joint pseudonym)
The Mamur Zapt and the return of the carpetPearce, Michael, 1933-