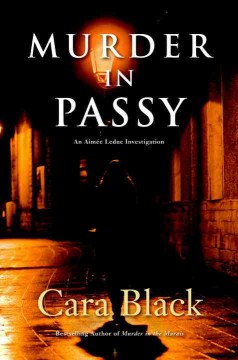 There's a lot of framing in Black's wacky, entertaining novels starring irrepressible Parisian investigator Aimée Leduc. Last time out (Murder in the Palais Royal, 2010), Aimée herself was being framed, for the near-murder of her partner, René. This time it's Aimée's godfather, Morbier, a copper himself, tapped for the murder of his new girlfriend, a society matron in Paris' Basque community. The tightening screws of a frame-up provide the necessary sense of urgency to send Aimée into high gear—careening around the streets of the city on her scooter, often in a little black dress and high heels—attempting to convince the inconvincible that she is only a couple of hairpin turns away from sorting it all out. This time most of the careening takes place in the insular neighborhood of Passy, where the tight-lipped Basques, keeping mum about the terrorists among them, don't respond well to Aimée's bull-headed brashness. The rest of us will follow Aimée anywhere, the blinder the alley the better, thrilled to hitch a ride on the back of her scooter. Copyright 2011 Booklist Reviews.

Proprietor of a computer security business in Paris and protagonist of Black's atmospheric series (yes, you can feel the Seine-soaked cobblestones through your feet as your read), smart, tough, and utterly likable Aimée Leduc admits to a penchant for bad boys. Aside from her partner, René, the one male constant in her life is her godfather, Morbier, commissaire of police. So when Morbier asks her to check in on his lady friend, Xavierre, who's planning her daughter's wedding and who's seemed distant lately, Aimée agrees. No, Xavierre is not very obliging when Aimée crashes a prewedding party at her elegant Passy mansion. Then Xavierre ends up strangled with her own scarf—and Morbier, implicated in her death, winds up in jail. Aimée immediately starts digging and discovers that Basque-born Xavierre's long-ago connection to the separatist group ETA has returned to haunt her and that a radical ETA offshoot called Euskadi Action has serious plans about some French Basque prisoners and an upcoming referendum. Soon, Aimée needs to rescue not only Morbier but a kidnapped Spanish princess. VERDICT Another fun, absorbing, well-plotted Aimée Leduc mystery, more brisk in the telling than ever; your passport to Paris next spring.—Barbara Hoffert, Library Journal

Full of French political intrigue, Black's atmospheric 11th Aimée Leduc investigation (after 2010's Murder in the Palais Royal) finds the Paris PI's world turned upside down with the arrest of her godfather and longtime mentor, Commissaire Morbier, for murder. Worse yet, the victim—Morbier's inamorata, Xavierre d'Eslay—was with Aimée minutes before her death by strangulation. To clear Morbier, Aimée must dig deep as his fellow officers close rank and refuse to cooperate. Helping Aimée are her detective agency partner, René; her cousin, Sebastian; and her former policeman lover, Melac, who may or may not have an agenda of his own during the investigation. Though Xavierre lived a life of privilege in the posh suburb of Passy, Aimée discovers her past is shrouded in secrecy, linked to Basque separatists and terrorist acts. While the characters and their motivations can sometimes be hard to follow, the plot builds to a satisfying conclusion. (Mar.)