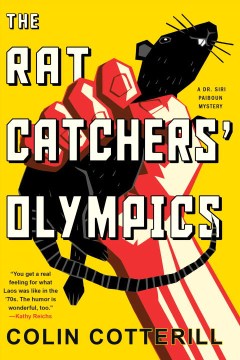 *Starred Review* In this long-running, critically acclaimed series, Cotterill's Dr. Siri Paiboun takes readers into the fear-drenched aftermath of the Communist takeover of Laos in the seventies. Dr. Paiboun (now unwillingly retired) and his wife, Madame Daeng, both have front-row seats for the spectacle of life under the wildly corrupt, ever-changing Communist regime—he, as a doctor and former national coroner of Laos, and Madame Daeng, as the proprietor of their village's most popular noodle shop. In this, the twelfth installment, the year is 1980, and Laos has been invited to compete in the Olympic Games held in Moscow. Dr. Paiboun, ever eager to escape the doldrums of retirement, volunteers to accompany the hapless Laotian athletes (they have no training and no equipment) to Moscow as team doctor. The Games become a nightmare for Paiboun, as he first must investigate an impostor among the athletes and then a murder. Along with a mystery that boils over into an international incident, Cotterill gives readers a wonderful re-creation of the 1980 Moscow Olympic Village and the preparations for the Games themselves. Cotterill does some bizarre things with his main characters, like giving Madame Daeng a tail and having Dr. Paiboun leave his body to communicate with spirits, but these strange add-ons don't detract from the overall impact of the book. Cotterill won the Crime Writers' Association Dagger in the Library Award. Copyright 2017 Booklist Reviews.

In his 12th adventure (after I Shot the Buddha), retired coroner Dr. Siri Paiboun and his wife score a trip to the 1980 Moscow Olympics as medical advisers to the Democratic People's Republic of Laos team. When a team member is accused of murder, Siri must solve the crime under the eye of two mistrustful governments. All the hallmarks of the series are present, including humor, magic realism, and the usual eccentric characters.—ACT

In Cotterill's delightful 12th whodunit starring Dr. Siri Paiboun (after 2016's ), Siri manages to become the medical officer for the 1980 Lao Olympic team, led by his best friend, Comrade Civilai. Of course, Siri's wife, Madame Daeng, has to go, too. An old acquaintance of Civilai's, Major Lien, is on the Lao shooting team, but Lien disappears between the photo-taking session at Vientiane's Wattay Airport and the plane carrying the team to Moscow. Siri, Daeng, and Civilai wonder whether the person with a false name who replaces Lien on the team might be an assassin, and, if so, who in Moscow might be his target. Cotterill does a fine job of capturing the spectacle of the Olympic village and games along with the way that the Lao team enthusiastically participates despite being destined to lose every event. He performs marvelous narrative tricks, using red herrings, tangents of all sorts, and a surprise, bonus murder to keep readers guessing. A competition between rat catchers from Laos, Botswana, and Moscow is a highlight. This quirky mystery has heart and humor in equal measure.