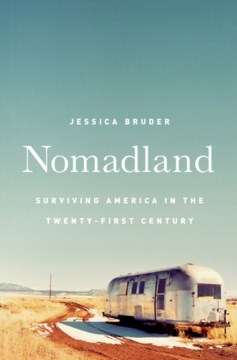 *Starred Review* What photographer Jacob Riis did for the tenement poor in How the Other Half Lives (1890) and what novelist Upton Sinclair did for stockyard workers in The Jungle (1906), journalist Bruder now does for a segment of today's older Americans forced to eke out a living as migrant workers. There is "no rest for the aging," says Bruder, underscoring her focus on people, primarily near or past retirement, whose lives and expectations were upended by the 2008 recession. This powerhouse of a book grew out of Bruder's article, "The End of Retirement," published in Harper's in 2014. She examines the phenomenon of a new tribe of down-and-outers—"workampers," or "houseless" people—who travel the country in vans as they follow short-term jobs, such as harvesting sugar beets, cleaning campsites and toilets in wilderness parks, and stocking and plucking merchandise from bins at an Amazon warehouse, averaging 15 miles a shift walking the facility's concrete floors. Bruder spent three years shadowing and interviewing members of this "new kind of wandering tribe." In the best immersive-journalism tradition, Bruder records her misadventures driving and living in a van and working in a beet field and at Amazon. Tying together the book is the story of Linda May, a woman in her sixties who takes on crushing jobs with optimistic aplomb. Visceral and haunting reporting. Copyright 2017 Booklist Reviews.

Expanding an eye-opening Harper's cover story showing that many Americans can no longer afford to quit work during the so-called golden years, Bruder introduces us to an intrepid bunch that take to their RVs to become migrant laborers, or "workampers."

What do you do when your mortgage is underwater, when a divorce or medical catastrophe depletes your savings, or when your anticipated retirement becomes financially impossible? A growing number of Americans address these crushing challenges by taking to the road, with an RV, van, or even a small car as their permanent home. Journalist Bruder joined these contemporary nomads, known as van-dwellers or "workampers." She closely follows Linda, in her mid-60s and traveling between jobs at an Amazon warehouse and a park campground. Linda and her growing "vanily" (van-dweller family) run the gamut of ages and backstories, though there is a preponderance of older people who are unable to retire and work physically strenuous, low-wage jobs to get by. Bruder touches on the deep social stigma of homelessness (van-dwellers fiercely reject that description), the surprisingly short history of the concept of retirement, the rarity of van-dwellers of color, and strategies for docking in plain sight in urban areas and finding a safe haven in rural areas. The people she meets exhibit pride, grit, resourcefulness, resilience, and, profoundly, the elation of freedom mingled with the terror of being one mechanical breakdown away from ruin. A must-read that is simultaneously hopeless and uplifting and certainly unforgettable.—Janet Ingraham Dwyer, State Lib. of Ohio, Columbus

Journalist Bruder () expands on an article originally published in where she examined the phenomenon of aging Americans adjusting to an economic climate in which they can't afford to retire. Many among them have discarded "stick and brick" traditional homes for "wheel estate" in the form of converted vans and RVs and have formed a nomadic culture of "workampers," evoking the desperate resourcefulness of those who lived through the Great Depression. Bruder follows her subjects as they harvest sugar beets, work at Amazon fulfillment centers during the holidays, and act as campground hosts. She conducts extensive interviews, attends the workampers' gatherings, and tests out survival tips, to the point where she makes "houselessness"—a lifestyle born out of necessity and compromise—seem like a new form of freedom, with its own kind of appeal. Of course, she also addresses the often-crushing financial and social circumstances in which these people live, and pointedly touches on the racial considerations that make this nomadic lifestyle a predominantly white trend. Tracing individuals throughout their journeys from coast to coast, Bruder conveys the phenomenon's human element, making this sociological study intimate, personal, and entertaining, even as the author critiques the economic factors behind the trend. Agent: Joy Harris, Joy Harris Literary Agency. (Sept.)

Nickel and dimed: on (not) getting by in AmericaEhrenreich, Barbara

Exiled in America: life on the margins in a residential motelDum, Christopher P.

Maid: hard work, low pay, and a mother's will to surviveLand, Stephanie

Our kids: the American dream in crisisPutnam, Robert D.