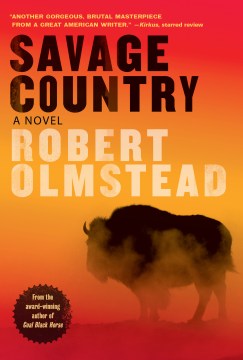 *Starred Review* Like so many outstanding novels about the taming of the West, there is a tragic ambiguity at the heart of Olmstead's brutal but beautiful tale of the last buffalo hunt. Although we admire the courage and unbridled individualism of the men and women who subdued an unforgiving country, we also recoil at the horrors they left in their wake, both to the land itself and to the indigenous peoples and animals who had managed to maintain an ecological balance before the arrival of white settlers. In the 1870s, Elizabeth Coughlin is the wife of a rancher who, deeply in debt, has killed himself, leaving Elizabeth with the burden of saving the land and providing for the hired hands. Before his death, Elizabeth's husband had hatched a desperate plan to set things right: a dangerous buffalo hunt below the aptly named Deadline, the demarcation point separating "civilized" Kansas from the treacherous Indian country to the south. Aided by her brother-in-law Michael, she gathers a Magnificent Seven–like band of misfits to undertake the seemingly suicidal hunt.What follows is an epic journey into a heart of darkness partially of their own making and partially defined by the worst that the unrelenting landscape can throw at them, from titanic lightning storms to rattlesnakes to the greed and treachery of their fellow hunters. The field of battle is strewn with victims (there are no victors), but none is more tragic than the buffalo, its ravaging described in the most visceral of details. For a certain kind of uncompromising yet lyrical writer—think of Cormac McCarthy, Larry McMurtry, or William Kittredge—the West offers a stage for a special kind of archetypal, almost Shakespearean tragedy, and Olmstead makes the most of it. Copyright 2017 Booklist Reviews.

Heartland Prize winner for Coal Black Horse, Olmstead tells the 1873-set story of Elizabeth Coughlin, left bankrupt when her husband dies, who takes over the buffalo hunt he had planned. The Comanche are quiet, but floods, fires, rattlesnakes, rabies, and blue northers make the going tough. Then there's the heart-destroying task of slaughtering noble animals.

In 1873, her husband's death leaves Elizabeth Coughlin in deep debt to the dangerous and conniving Mr. Whitechurch. Her only hope of raising money is a buffalo hunt planned by her late spouse. With the grudging assistance of taciturn brother-in-law Michael, who had been a professional game hunter in Europe and Africa, she and her husband's hired men head into Native lands. No one is quite prepared for the dangers along the way—wild storms, poisonous snakes, wayward travelers, wildfires, animal bites, and Native warriors. Elizabeth, unlike many female characters in stock Westerns, begins to develop her own sense of independence and self, although Olmstead (Coal Black Horse) could have fleshed her out a bit more. Graphic descriptions of hunts and violence may turn some readers away, but the accurate account of such violent times, and in particular the hunts that decimated vast buffalo herds of the West, is necessary. Fans of Larry McMurtry's Lonesome Dove will enjoy this thoroughly researched epic Western. [See Prepub Alert, 5/3/17.]—Brooke Bolton, Boonville-Warrick Cty. P.L., IN

Hunters, skinners, and teamsters slaughter herds of buffalo on the Old West plains of 1873 in Olmstead's ninth novel, in an orgy of killing for profit on a grand and wasteful scale. Olmstead () presents a grim, gruesome tale of buffalo hunting and harsh, deadly frontier life. Elizabeth Coughlin, recently widowed, is set to lose her ranch to a cheating banker named Whitechurch. Desperate to pay off her debt, she and her brother-in-law Michael organize a large hunting party to go into Comanche territory to find the last massive herd of buffalo, which have been hunted nearly to extinction. Despite a warning that Whitechurch will try to kill them, Michael and Elizabeth lead the party to the hunting grounds, enduring prairie fires, floods, heat, cold, fatigue, injuries, illness, gory evidence of Comanche atrocities, and the ever-present danger of ambush by Whitechurch's gunmen. Michael is a stone-cold killer, patient advisor, and teacher of fieldcraft, and Elizabeth shows remarkable courage, judgment, and strength of character as the leader of the unwashed, profane, rough men in the bloody business of killing and skinning a thousand buffalo a day when not killing each other. This is a powerful depiction of the brutality of the Old West, where life was cheap and easily taken.