Birding without borders : an obsession, a quest, and the biggest year in the world / Noah Strycker ; foreword by Kenn Kaufman. 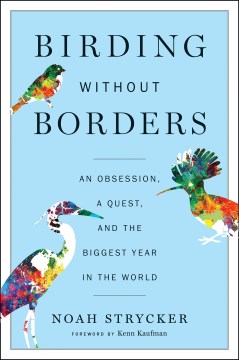 With a nod to Tennessee Williams, Strycker did indeed "depend upon the kindness of strangers" when he planned his ambitious year of crisscrossing the globe in order to see half the world's birds in 365 days. Through emails and listserv messages, Strycker created a network of local guides who could help him hit the ground running no matter where he landed, cavort up mountain tops and hack through rainforests to capture a fleeting glimpse of species found only in that place at that time. His trek began on January 1, 2015, with spotting the Cape petrel in Antarctica and ended with the silver-breasted broadbill in India's Assam province a year later. In the course of seeing 6,042 birds, far surpassing his goal of 5,000, Strycker traveled from Australia to Argentina, China to Cameroon, Peru to the Philippines, carrying only his backpack, binoculars, and the merest essentials. With ecotourism becoming increasingly popular, especially among birding enthusiasts, Strycker's straight-ahead tale of his big year will appeal to like-minded devotees and inspire armchair adventurers. Copyright 2017 Booklist Reviews.

In 2015, Strycker traveled to 41 countries and seven continents, setting a record of viewing 6,042 bird species in one year, while surpassing the old mark of 4,341 and his personal goal of 5,000. This compelling account of his epic quest is a tribute to the author's thorough planning, record-keeping, and personal endurance—showing that this accomplishment was more than a personal stunt. The narrative is full of humor, descriptions of places, and encounters with unforgettable individuals. While in the field every day, Strycker maintained a blog and kept in communication with family and friends. Relying solely on numerous in-country birding guides, the author took 112 plane flights, covering 100,514 miles, along with multiple other modes of travel. His varied journeys were fraught with discomfort, danger, and uncertainty, but there were triumphs and achievement as well. Strycker is an excellent writer and provides a comprehensive analysis of his trips' results, though the book would have been improved with a map of his routes. Highly recommended for anyone interested in travel, natural history, and adventure.—Henry T. Armistead, formerly with Free Lib. of Philadelphia

Strycker (), a birder and adventurer, chronicles the record-setting year he spent trekking the globe, succeeding in his aim "to see 5,000 species of birds—about half the birds on Earth—in the ultimate round-the-world journey." He begins in Antarctica on Jan. 1, 2015, and ends on December 31 in Australia, traveling to every continent and spotting more than 6,000 species. Strycker traces his lifelong interest in ornithology to his Pacific Northwest childhood and a fortuitous set of bird-related events that took place in his life at age 10. In this volume Strycker tracks what he saw during his "big year" and describes his planning process and the ground rules he established. Every bird he counted, for example, would need to be "seen by at least one other person." His companions had to be local, too, "living in the same country where we went birding together." This would prevent loneliness on his solo trip and help to give him the inside scoop. Even readers who wouldn't know a marvellous spatuletail from a southern ground hornbill will be awed by Strycker's achievement and appreciate the passion with which he pursues his interest. Photos.

One more warbler: a life with birdsEmanuel, Victor

On the wing: to the edge of the Earth with the peregrine falconTennant, Alan, 1943-

The peregrine: the hill of summer ; &, Diaries : the complete works of J.A. BakerBaker, J. A. (John Alec)

The house of owlsAngell, Tony

The singing life of birds: the art and science of listening to birdsongKroodsma, Donald E.

North on the wing: travels with the songbird migration of springBeehler, Bruce McP

The secret lives of bats: my adventures with the world's most misunderstood mammalsTuttle, Merlin D.