They can't kill us all : Ferguson, Baltimore, and a new era in America's racial justice movement / Wesley Lowery. 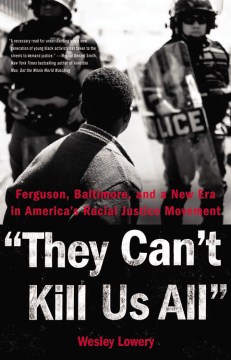 A political journalist with the Washington Post, Lowery was part of the team that won the 2016 Pulitzer Prize in national reporting for creating a database of fatal shootings by the police and using it to clarify why they shoot to kill and who the victims will likely be. Here he details the many violent events leading to #blacklivesmatter as well as the impact of that movement. Significantly, he contextualizes with a 50-year history of racial violence and personalizes with the story of his own life growing up biracial in Cleveland, the son of a black journalist. Important note: creating the database was his idea. With a 50,000-copy first printing.

Washington Post reporter Lowery draws on his investigative reporting experience to tell the stories of black communities and their relationship to the police. This journey takes him from Ferguson, MO, to his hometown of Cleveland, OH, to Charleston, SC, and Baltimore as he chronicles the aftermath of the deaths of Michael Brown, Tamir Rice, Walter Scott, and Freddie Gray. By focusing on protesters, the families of the deceased, and other reporters, Lowery brings a much-needed human context to these events. The narrative is highly personal, since the author also reflects on his childhood in Cleveland, his identity as a black reporter, and his own arrest while covering events in Ferguson. Included are brief profiles of prominent activists, such as Johnetta Elzie, DeRey Mckesson, Bree Newsome, and Brittany Packnett, in order to explain their motivations. Furthermore, Lowery muses on the media's role in documenting the protests and the broken relationship between police and the communities that they serve. The work ends with an account of activist activities at the University of Missouri and protesters' thoughts on the future of the continued movement for equal social justice. VERDICT Highly recommended for those seeking additional clarity on current events.—Rebekah Kati, Durham, NC. Copyright 2016 Library Journal.

One of the first books on the Black Lives Matter movement, Washington Post writer Lowery's debut draws upon journalism, memoir, and history. ( 10/15/16)